In the short term we believe that as markets adjust to the US credit rating downgrade news historical correlations are likely to break down. Eventually though they would likely return to around historical levels as the world economies adjusts to what analysts are calling the “new normal” for US sovereign debt. Which allow us to answer my questions about the price of crude oil in the current context. How much is a barrel of oil really worth now that both measure of value (the US$ and the Euro) have lost investors’ confidence and stability?

Here is the most important message from this data set (you can skip the rest of the post once you are done).

If we assume that when it comes to relative value Gold is doing a better job of predicting what something is really worth, how does that translate into cost? On average a barrel of oil costs about 0.0668 ounce of Gold. This puts fair value of a barrel of oil at about 114 using the average, at about 85 using the low over the last 3 years (including the dip last week) and at about 135 using the high of .08 over the same period. 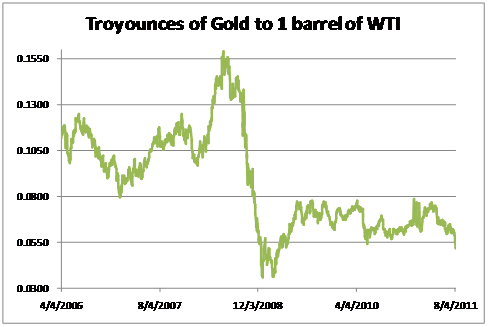 Admittedly the analysis is flawed because the historical relationship presented below may no longer hold and gold by a number of standards may be overvalued (historically speaking). But it does provide an alternate view at evaluating market prices using an alternate relative value mechanism.

Lesson number two (with the same qualifications applied above). Over the entire period studied when Gold price tends to increase the price of WTI also tends to increase 37% of the time. There have been several instances where this relationship has not held but as the trailing correlation graph shows above there are more instances where the correlation has been moderately- highly positive. However given the possibility of a weakening dollar we believe that the price of WTI is likely to show an increasing trend in the coming months. 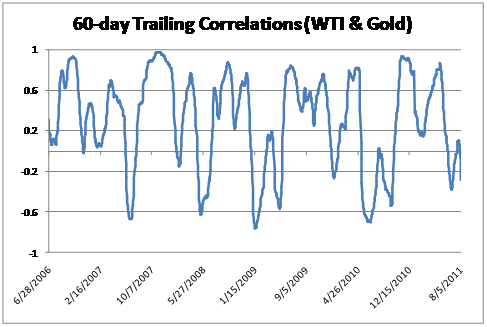 In addition to crude oil’s correlation with gold also look at three of currency pairs and their relationship with our favorite commodity. What we really want to see is how does trailing correlation vary across currencies with crude oil and how different is that variation when compared to what we have observed between gold and crude oil.

As the graph indicates below and the historical correlation coefficient of -0.16 tells us there is a very low relationship between movements in crude oil and the USD/ JPY FX rate. 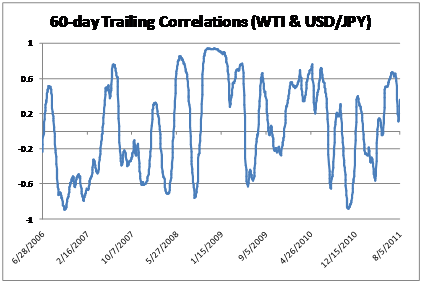 The price graph below shows us that the Japanese yen has been an ever strengthening currency against the USD dollar as indicated by the declining slope of the USD/ JPY trend line. We would expect this trend to continue after the downgrade as entities move to increasing their holdings in the Japanese yen (safe haven currency). This would further weaken the US dollar again the JPY.

Though there does not appear to be any discerning trend in the trailing correlation graph above, the price graph below does show some periods where correlations have been markedly negative. Mostly recently from mid- 2010 the graph shows that when USD/JPY declined considerably, WTI saw a rising trend. This trend is expected to continue into the future as a weakening US dollar would push up WTI prices while lowering the USD/JPY exchange rate 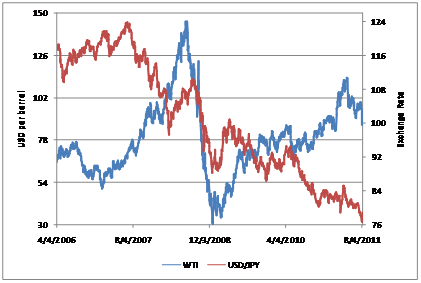 There clearly is a marked negative correlation between WTI and the USD / EUR rate. A fall in the exchange rate was accompanied by a fall in WTI around 70% of the time. 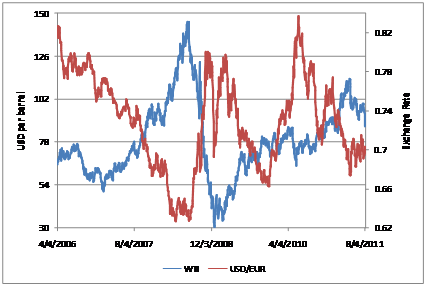 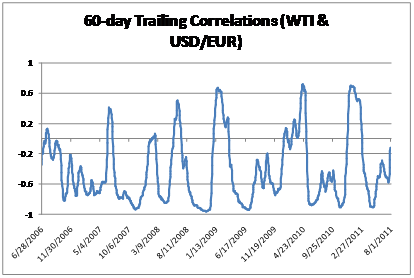 This trend in correlation has been fairly consistent over time however the future correlation trend remains uncertain:

The future performance of the Euro against the USD is under much debate. Some analysts believe that the Euro plagued by the spreading financial crisis in Greece, Spain and now Italy will not benefit from the US dollars weakness because of the downgrade and will depreciate against the US dollar. Historical correlations between WTI and USD/EUR therefore may not hold in the coming months. The WTI prices would be expected to rise on the back of a weakening US dollar but USD/ EUR rates could rise too if the Euro underperforms the US currency.

Historically WTI prices and the USD/AUD rates are on average markedly negatively correlated. When the currency pair declines either due to an appreciation in the Australian dollar or depreciation in the US dollar the WTI prices generally have seen a increase and vice versa as can be seen in the price and trailing correlation graphs below. 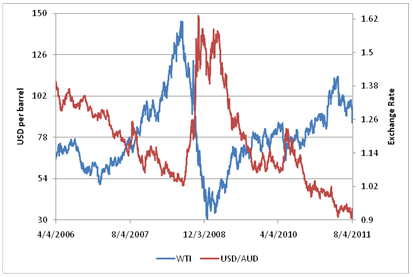 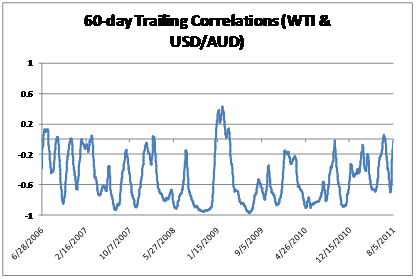 Gold and the USD/ AUD rate also have a moderately high negative correlation indicating that when there is a rise in gold prices the USD/ AUD rates tend to experience a fall around 68% of the time as can be seen in the price graph below: 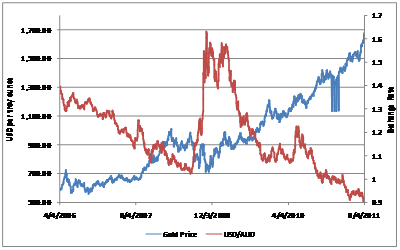 Based on our discussion above if the impact of the downgrade is a weakening of the US dollar and currency cash flows toward safe haven currencies like the Japanese yen then the Australian dollar will likely underperform in the short term as compared to the US dollar as investors move away from all the riskier currencies including the AUD. Initially therefore we would expect to see the USD/ AUD exchange rate to increase and historical correlations to break down.

However over the longer run as the US dollar continues to weaken and the price of gold (the commodity that backs the AUD) continues to rally the Australian dollar will begin to benefit from the aftermath of the downgrade and start to appreciate against the dollar leading to a decline in the USD/ AUD FX rates. This decline in prices accompanied by an anticipated increase in WTI prices we should expect to see a return to historical correlations.