The financial strength of Deutsche Bank has been the subject of main stream financial news throughout this year. Analysts have been commenting on the bank’s likelihood of default, its ability to maintain ratings, to make money and increase capital, in light of litigation woes, downsizing, depressed share prices and lack lustre financials. This post looks at some of the recent developments for Deutsche Bank and assesses its strength in relation to its rivals using a probability of default measure.

Early November 2016 Fitch placed Deutsche Bank under negative ratings watch for its longer term issuer default, short term issue default viability and debt ratings. This indicates that there is a possibility that Fitch might lower the bank’s ratings if the outlook and results remain unfavourable. This is in view of the listless investment environment and the bank’s ability to generate revenue and increase capital in the next year. Further, the bank’s outstanding legal costs are a source of worry. This includes the $14 billion fine imposed by the US Department of Justice in early October 2016 following findings of the bank’s contributory role to the 2007-2008 subprime mortgage crisis. The fines are significantly in excess of the provisions the bank has set aside to cover its legal risks amounting to $5.9 billion as of the end of September 2016. 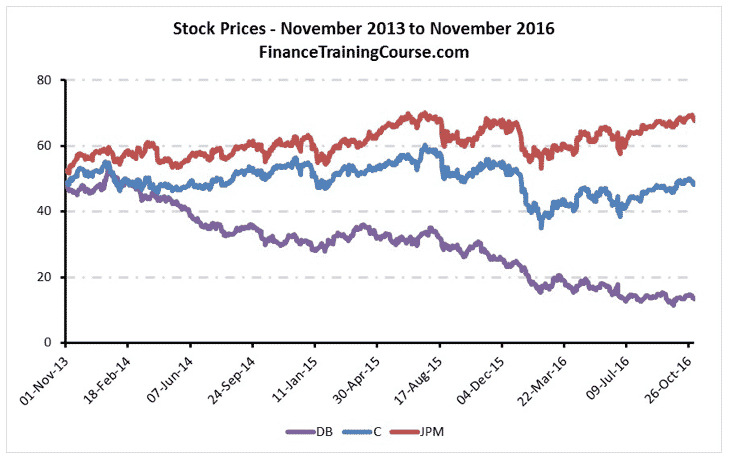 The bank has disclosed a third quarter profit in 2016 following cuts and/ or simplification in its resources, activities and regions. It also showed an improved capital position in light of its deleveraging efforts – getting the green light from Chinese authorities to finally sell its stake in Hua Xia. Further asset sales are planned, including the sale or public offer of its German retail banking subsidiary PostBank.

However, investors and rating agencies are still cautious given:

Earlier this year, the price of Credit Default Swaps on Deutsche bank spiked indicating an increased probability of default following consecutive quarterly losses in 2015. In recent news articles there is still apprehension regarding the strength of the bank. In this post we see how Deutsche Bank compares with its competitors (Citi, JP Morgan Chase & Goldman Sachs) by looking at the probability of default measure assessed using the Merton structured approach.

For this analysis we have used share prices and quarterly and annual Balance Sheet data available on Google Finance. The Merton approach calculates the probability of default by using the

We have determined 1 year and 5 year probabilities of default as given below: 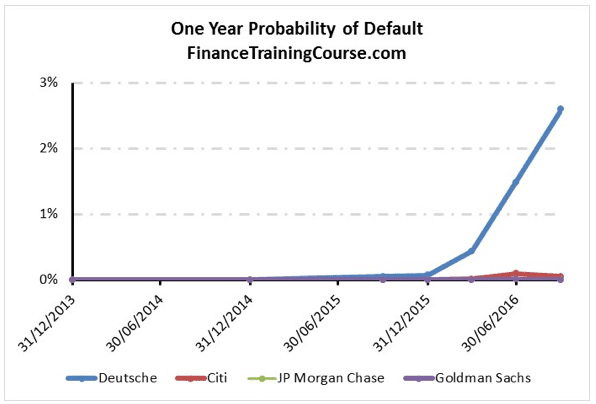 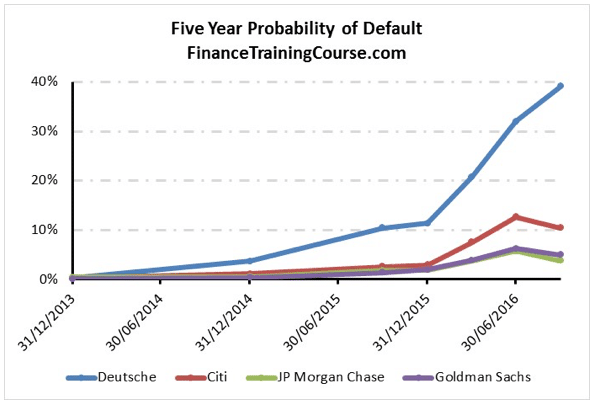 Deutsche Bank is clearly underperforming in relation to its peers with a greater likelihood of default. Probabilities of default for the bank have increased over the past 3 years.