Skip to content
Capital estimation for Liquidity Risk Management is a difficult exercise. It comes up as part of the internal liquidity risk management process as well as the internal capital adequacy assessment process (ICAAP). This post and the liquidity risk management series that follows suggests a framework for ongoing discussion based on the work done by our team with a number of regional banking customers
7 mins read time

Capital estimation for Liquidity Risk Management is a difficult exercise. It comes up as part of the internal liquidity risk management process as well as the internal capital adequacy assessment process (ICAAP). This post and the liquidity risk management series that follows suggests a framework for ongoing discussion based on the work done by our team with a number of regional banking customers in this area.

By definition banks take a small Return on asset (1% – 1.5%) and use leverage and turnover to scale it to a 15% – 18% Return on Equity. When market conditions change and a bank becomes the subject of a name crisis and a subsequent liquidity run, the same process becomes the basis for a death chant for the bank. We try to de-lever the bank by selling assets and paying down liabilities and the process quickly turns into a fire sale driven by the speed at which word gets out about the crisis. 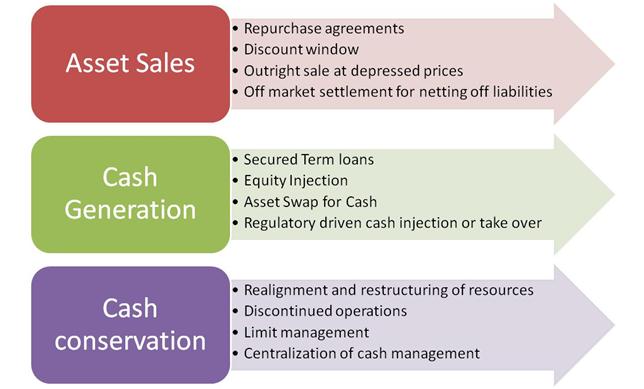 
Reducing leverage by distressed asset sales to generate cash is one of the primary defense mechanisms used by the operating teams responsible for shoring up cash reserves. Unfortunately every slice of value lost to the distressed sale process is a slice out of the equity pool or capital base of the bank. An alternate mechanism that can protect capital is using the Interbank Repurchase (Repo) contract to use liquid or acceptable assets as collateral but that too is dependent on the availability of un-encumbered liquid securities on the balance sheet as well as availability of counterparty limits. Both can quickly disappear in times of crisis. The last and final option is the central bank discount window the use of which may provide temporary relief but serves as a double edged sword by further feeding the name and reputational crisis. While a literature review on the topic also suggest cash conservation approaches by a re-alignment of businesses and a restructuring of resources, these last two solutions assume that the bank in question would actually survive the crisis to see the end stage benefits of re-alignment and re-structuring.

Liquidity Reserves: Real or a Mirage

A questionable assumption that often comes up when we review Liquidity Contingency Plans is the availability or usage of Statutory Liquidity (SLR) and Cash Reserves (CRR) held for our account with the Central Bank. You can only touch those assets when your franchise and license is gone and the bank has been shut down. This means that if you want to survive the crisis with your banking license intact there is a very good chance that the 6% core liquidity you had factored into your liquidation analysis would NOT be available to you as a going concern in times of a crisis. That liquidity layer has been reserved by the central bank as the last defense for depositor protection and no central bank is likely to grant abuse of that layer to a going concern bank. 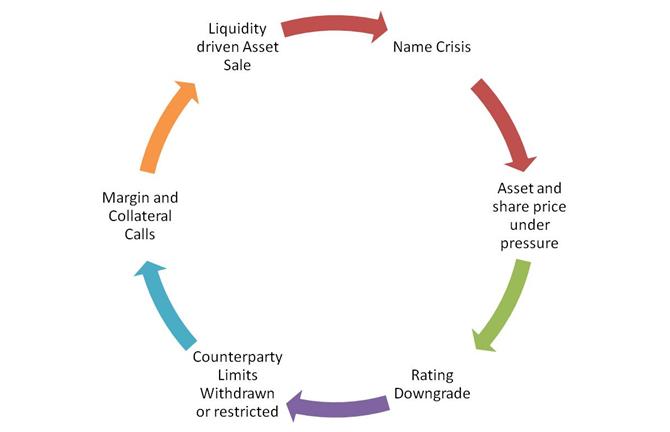 As the Bear Stearns case study illustrate the typical Liquidity crisis begins with a negative event that can take many shapes and forms. The resulting coverage and publicity leads to pressure on not just the share price but also on the asset portfolio carried on the bank’s balance sheet as market players take defensive cover by selling their own inventory or aggressive bets by short selling the securities in question. Somewhere in this entire process rating agencies finally wake up and downgrade the issuer across the board leading to a reduction or cancellation of counterparty lines. Even when lines are not cancelled given the write down in value witnessed in the market, calls for margin and collateral start coming in and further feed liquidity pressures.

What triggers a Name Crisis that leads to the vicious cycle that can destroy the inherent value in a 90 year old franchise in less than 3 months. Typically a name crisis is triggered by a change in market conditions that impact a fundamental business driver for the bank. The change in market conditions triggers either a large operational loss or a series of operation losses, at times related to a correction in asset prices, at other resulting in a permanent reduction in margins and spreads. Depending on when this is declared and becomes public knowledge and what the bank does to restore confidence drives what happens next. One approach used by management teams is to defer the news as much as possible by creative accounting or accounting hand waving which simply changes the nature of the crisis from an asset price or margin related crisis to a much more serious regulatory or accounting scandal with similar end results.

Figure 3 What triggers a name crisis?


The problem however is that market players have a very well established defensive response to a name crisis after four decades of bank failures. Which implies that once you hit a crisis the speed with which you generate cash, lock in a deal with a buyer and get rid of questionable assets determines how much value you will lose to the market driven liquidation process. The only failsafe here is the ability of the local regulator and lender of last resort to keep the lifeline of counterparty and interbank credit lines open. As was observed at the peak of the crisis in North America, UK and a number of Middle Eastern market this ability to keep market opens determines how low prices will go, the magnitude of the fire sale, the length of the correction cycle and the number of banks that actually go under. 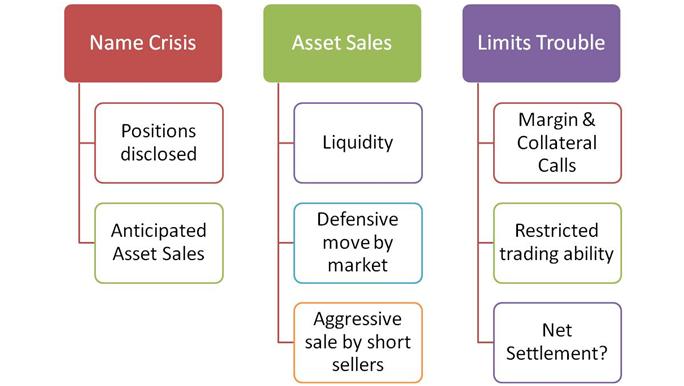 Figure 4 Market response to a Name Crisis and the Liquidity Run cycle.


The above context provides a clear roadmap for building a framework for liquidity risk management. The ending position or the end game is a liquidity driven asset sale. A successful framework would simply jump the gun and get to the asset sale before the market does. The only reason why you would not jump the gun is if you have cash, a secured contractually bound commitment for cash, a white knight or any other acceptable buyer for your franchise and an agreement on the sale price and shareholders’ approval for that sale in place. If you are missing any of the above, your only defense is to get to the asset sale before the market does. 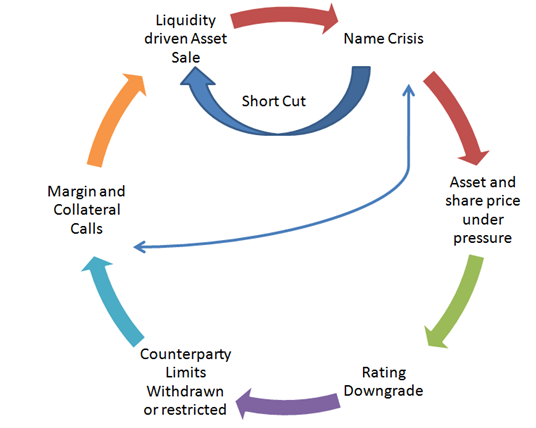 The problem with the above assertion is the responsiveness of the Board of directors and the Senior executive team to the seriousness of the name crisis. The most common response by both is a combination of the following

This happens especially when the liquidity policy process was run as a compliance checklist and did not run its full course at the board and executive management level. If a full blown liquidity simulation was run for the board and the senior management team and if they had seen for themselves the consequences of speed as well as delay such reaction don’t happen. The time for debate is before the crisis hits, not during a melt down. The board and the senior team must understand that illiquid assets are equivalent of high explosives and delay in asset sale is analogous to a short fuse. When you combine the two with a name crisis you will blow the bank irrespective of its history or the power of its franchise. When the likes of Bear, Lehman, Merrill, AIG and Morgan failed, your bank and your board is not going to see through the crisis to a different and more pleasant fate.

The actual estimated liquidity risk capital would be a weighted combination of the above 4 elements. How do we actually go about estimating this capital estimate for liquidity risk?

The third piece (liquidation cost) is more complex and would require and asset by asset estimate of liquidity haircuts (value at risk driven) but is a pure mechanical exercise. The last and final piece is simpler and is your current liquidity gap (or your expected liquidity gap) multiplied by the worst case (a value at risk estimate) incremental interest rate cost you are likely to experience in a liquidity crisis.

Combine the four pieces and you have an initial estimate for liquidity risk capital which can be fine tuned in later iterations.

I thought it would be useful to close with the example of how long did it actually take for a liquidity driven crisis to sink Bear Stearns. The sidebar that follows presents a summarized timeline of the 14 weeks it took for Bear to go under.

7 March 2008: Shares of Carlyle Capital Corporation (CCC), to which BS has significant exposure, suspended because of margin calls and defaults notices by lenders. Triggers concerns regarding liquidity

10 March 2008: BS Press Release to reassure investors that liquidity concerns are false. Rumors of loss of confidence and loss of credit facilities.

11 March 2008: CFO says rumors false. Goldman Sachs says it will not stand in for it clients if they wished to undertake derivative deals with BS

16 March 2008: JP Morgan announces that they have acquired BS for $2 per share

Jawwad Farid is a Columbia Business School Alumni, a Fellow Society of Actuaries and the Founder CEO of Alchemy Technologies. Jawwad has been teaching and working with the banking industry on ICAAP frameworks and submissions from early 2007 when the Basel II framework was rolled out in the region. For more detailed material on ICAAP prepared by the same team, please see  Sample ICAAP report templates, ICAAP Excel worksheets and a primer on ICAAP as well as our ICAAP Training workshop series scheduled for late March 2011 in Langkawi, Malaysia.