The conventional insurance system in vogue was declared against Shari’ah over a century ago. The search was on for an Insurance Operation Model in consonance with Islamic Shari’ah principles. Muslehuddin made a careful and in depth objective study of the emerging Islamic reservations and issues faced by the Ummah for the need and operation of the insurance industry compatible with Shari’ah. He traced the history, assessed the insurance contacts in vogue, carried exhaustive commendable research in the context of ”Insurance & Shari’ah” to qualify, in 1966, for the  Doctorate of Law, from University of London. His outstanding work and knowledge capital on the subject, “Insurance and Islamic Law,” was first published[1] in 1969.

Short of using the current insurance terminology ‘Takaful’, meaning “guaranteeing each other,” Muslehuddin used the expression “Pure mutual institutions” in the conclusion to his pioneering and exhaustive research. In “Mutual Insurance under Islamic Law,” he suggested as follows:

“Pure mutual institutions accord with the spirit of Islamic law but they are criticised by some as unstable, having no reserves to stand upon. This not a serious defect as reserves may be built with the consent of the members, for the welfare of the community, in the form of a waqf (endowment). Thus, mutual associations may be formed on the principle of assessment, every member paying the agreed amount or an amount according to the value of the insured property as a first contribution, while liable to pay an additional sum (i.e., assessment), in proportion to the first contribution, in case the loss exceeds the sum-total (of the first contribution). If, according to the annual account, loss does not exceed the collected amount and there remains a surplus, a greater part of it will be returned to the member or credited to reduce his future premium, i.e. contribution (in case policy is renewed), carrying the remainder to the reserves. The reserve so built may be invested in commercial pursuits permissible in Islam…[2]

It may be recalled that life insurance provides for the payment of a stipulated amount of money upon the death of the insured, without regard to the value of his life, for it is impossible to place a monetary value on human life. The amount payable to the insured is, thus, a definite sum of money and it is the amount of contribution only which is to be determined.  This can be done by mutual agreement. And, in this regard, the procedure adopted by mutual life insurance societies may serve as a guide. [3]

These are our suggestions which may be improved upon and modified in the light of the experience.”

Introduction of Television in this region in early sixties perhaps gave a boost to the debate. The Ulam? were thronged with queries to find and define a Shari’ah compatible insurance system. Sudan and Malaysia established Takaful companies in 1979 and 1980 respectively by making some adjustments in the Pure mutual insurance theme and titled the Islamic Insurance configuration as Takaful/solidarity.  Islamic Ideology Council of Pakistan issued its recommendations about Shari’ah compatible need of Insurance System in detail on 1st March 1984. The Grand Counsel of Islamic Scholars in Makkah, Saudi Arabia, Majma al-Fiqh, approved the Takaful system as the alternative form of insurance compatible with Islamic Shari’ah, in 1985. Thus, all of them validating the theme, pure mutual insurance, first propagated by Muhammad Muslehuddin in 1966.

The Takaful concept is in line with the principles of compensation and shared responsibilities among the community. Muslehuddin traces the origin of insurance as follows:[4]

“Insurance finds its expression in the payment of blood money by the group so as to lighten the burden of the individual member. This assumed the form of a custom to which there is a particular reference in the Hedaya, (Margh?nan?n?, Vol. 4, Kitab-al-Ma’?qil, pp. ,641-50) under the title of ‘ma’aqil’.

…To explain it in more detail we give a reference from Encyclopaedia of Islam:  “?kila is the name of a man’s male relations who according to the percept of the religious law have to pay the penalty (the ‘?kl) for him, when unintentionally he has caused the death of a Moslem. This decree was based on a verdict of the Prophet. One day in quarrel between two women of the Hudhail tribe one of them, who was with child, was killed by the other with a stone, which hit her in the womb. When, soon after, the other woman also died, the Prophet decided, that her kin (?kila, or, according to a different reading, her, ?saba, i.e. i.e. agnates), in accordance with an old custom, had to pay the penalty to the relatives of the woman who had been killed.”

This reflects the original custom of the ancient Arabs whereby the whole tribe had to pay the wergild. It is this community pooling and the spirit of cooperation which has been aptly described as the essence of insurance. (Insurance, in EC (new edition), Vol. 7, p. 617.)”

After a lapse of thirteen and a half years since the recommendation of the Council, the Federal Government of Pakistan ultimately issued “Takaful Rules 2005” on 3rd September 2005, giving the country a viable compatible Islamic operational model — Takaful.

The Rules defines “Takaful operator” as a person who is permitted by the SECP to carry Takaful business. The role of the Takaful operator shall be the management of the ‘Participants Takaful Fund’ (PTF) and related risks. At the initial stages of the set-up of the PTF the Takaful operator and any of its shareholders may at their discretion make an initial donation or qard-e-hasna to the PTF. When the PTF including reserves are insufficient to meet their current payments less receipts, the deficit shall be funded by way of an interest-free loan (qard-e-hasna) from the Shareholders Fund (SHF).  The Takaful operator shall undertake to provide qard-e-hasna to the PTF to make good of the deficit. The qard-e-hasna may be recovered from future surpluses without any excess on the actual amount given to the PTF. The objectives of the PTF shall be to provide relief to participants against defined losses as per the PTF rules and the Participants Membership Document (PMD).

The Council of Islamic Ideology in its Report emphatically stated as follows:

“There was also a general agreement that since the constitution of the various Islamic Insurance Companies was not based on mutual sharing of the risks and the shareholders and policy holders of the companies under review are different entities, none of these could be adopted to serve as a model for the working group[5].”

For the ready reference of readers I cite below extracts of the ruling of The Council of Leading Scholars of Saudi Arabia regarding two main types of insurance contracts: (1) conventional insurance in vogue which they deemed forbidden based on gharar; and (2) “cooperative insurance (al-ta’min al-ta`awuni) built on the principles of voluntary contribution (tabarru`) and mutual cooperation (ta`awun)”, which they approve permissible, since gharar does not affect non-commutative contracts:

“The decision of the Council of Leading Scholars of Saudi Arabia, no. 51, dated 4/4/1397 (1976) on the permissibility of cooperative insurance and its compliance with the principles of Islamic law:[6]

All praise is for Allah only; blessings and peace be upon the prophet after whom there will be no other prophet. The Tenth Session of the Council of Leading Scholars, held in the city of Riyadh, in the month of Rabi’ al-Awwal:

The Council has taken into account the announcement made by a group of experts on cooperative insurance, which is said to be a viable alternative for Muslims wanting to avoid commercial insurance. It is also mentioned by the experts that cooperative insurance will be able to realize the objectives of Islamic law.

After the proposal was studied and researched and the opinions of the scholars sought, the Council decided, with the exception of his Excellency, Shaykh Abdullah bin Manee, that Islamic cooperative insurance is a viable alternative to commercial insurance, as it will help to fulfill the needs of the Muslim society for the following reasons:

“Interestingly, while the Islamic insurance industry has adopted a name suggestive of a mutual cooperative system, Takaful companies have generally been structured as for profit shareholder-owned companies, or subdivisions thereof. In other words, the corporate form of those Takaful companies is identical to that of the commercial insurance companies whose contracts the Ulama forbade. Takaful companies invoke non commutativity by stipulating that the shareholders pay policyholder claims as a form of voluntary contribution (tabarru`), where the operator is usually set up in the form of silent partnership (mudaraba), with the exception of few recent attempts at using agency (wakala) – while still falling short of mutual forms. In both structures, there are unresolved fiqhi issues about bindingness of promises in such voluntary tabarru`. It would appear, thus, that in the Islamic insurance (risk intermediation) industry as well as in the Islamic banking (credit intermediation) industry, mutuality can align rhetoric with reality and resolve simultaneously a number of corporate governance, religious, and financial problems.”

The element of rib? – the receiving of interest – as well as the forbidden ventures, such as gambling, dealing in alcohol, and night club activities, ambiguity or deception, etc. leaves many financial products, including conventional insurance, in opposition to Shari’ah. Thus one billion eight hundred and twenty-three million people in 2009, which number is increasing at the rate of 1.84% annually, have but few options when shopping for products that conform to their faith.

However, local and foreign powerful lobbies and vested interest groups who were behind the scene, influenced the consultants to delete and totally drop the provision of mutual insurance companies as well as the important provision of Policyholder Directors on the Board of the company (who would have watched out for the interests of life insurance policyholders) from the new Insurance Ordinance, 2000 legislation.

To be fair to the policy owners, their representatives and beneficiaries and other stakeholders, the government must make an immediate amendment in the Insurance Ordinance 2000 to insert a specific provision for ‘mutual insurance company’ operations as well as representation of not less than two-third Policyholders’ Directors on the Board of a commercial Family Takaful Operator to watch and safeguard the interests of the policyholders.

Takaful models are based on mutual cooperation, responsibility, assurance, protection and assistance among groups of participants. Its principles are similar to those that underpin mainstream mutual insurance contracts. Besides, a Takaful product needs to strictly follow the norms of Shari’ah compatible principles. The Board of Islamic Shari’ah Scholars’ role has been specifically assigned to vet business decisions.

Each Takaful operator under Rule 34 (1) of the Takaful Rules 2005 is required to appoint a Shari’ah Board (SB) of not less than three members which shall be responsible for the approval of products, documentation as well as approval of all operational practices and investment of funds. The Takaful operator shall appoint only high calibre scholars who are specialized jurists in fiqh almu’amalat (Islamic commercial jurisprudence) to such Boards. In addition, they shall have knowledge of modern financial dealings and transactions.

Under the conventional structure of insurance the insured shifts the risk to the insurer, but under Takaful, by incorporating the risk bearing condition, the insured is also the insurer. The golden principle of ‘bear ye one another’s burdens’ applies as on the occurrence of a loss the members share the risk themselves. The participants’ (voluntary) contributions towards the pool to mitigate losses expunge the element of gharar from the contract.  Conditions of risk-bearing, indemnity in kind and shari’ah compliance investments change the character of insurance in vogue and free it from the odium of contractual riba, qimar (gambling) and, to some extent, gharar.

Unlike conventional insurance, where risk is transferred from the policyholder to the insurance company, Takaful requires all participants to share risk amongst them-selves. They pay contributions for the quantum of risk as is the case with conventional insurance practice, which are calculated on the basis of published morbidity and mortality tables. These contributions are then pooled in ‘Participants Takaful Fund’ which is invested strictly in Shari’ah approved ventures, under Rule 19 of the TakafulRules 2005. 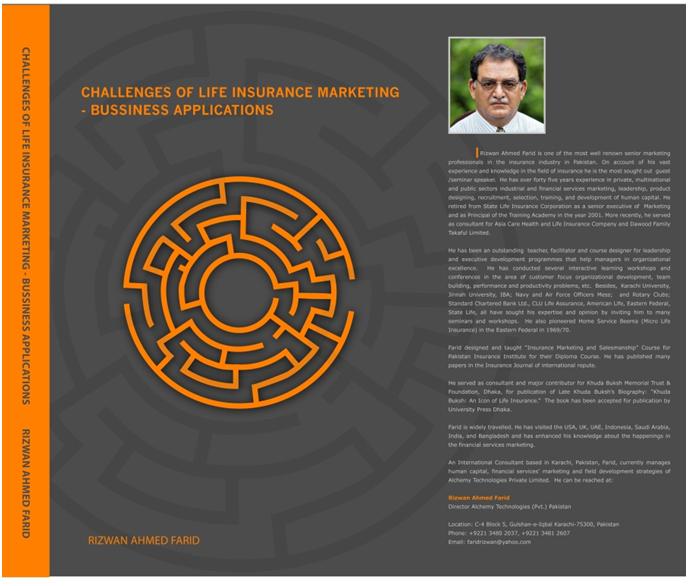