This morning, as usual, my first task was to sign into my Google Analytics dash board and take a quick peek at my Real Time visitor’s screen for my blog traffic.

Imagine my surprise when I see a huge blob in the south of the Atlantic ocean corresponding to no known human habitat (Atlantis?). 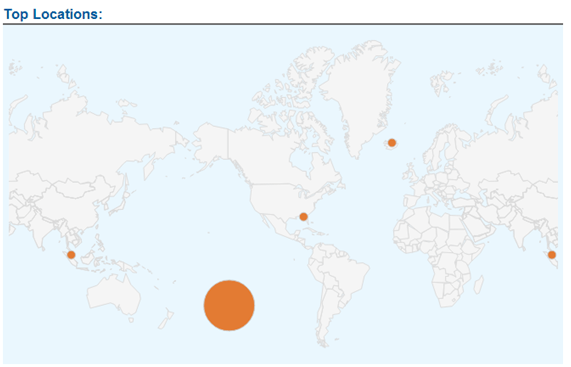 A quick check confirmed that the blob was real. And when you hovered on it, it showed up as a group of visitors from the International Space Station.

My first reaction was Wow!. We have followers in space who are reading my blog right now. How cool is that? (They have broad band internet at the ISS, that is even cooler)

My second reaction was, what does Central Bank Risk Management (our last post a few hours ago) has to do with Astronauts on the International Space Station? (They must be really bored up there?). Then I thought maybe they are reading our Excel Risk Models post, since we covered Monte Carlo Simulation and Interest Rate Models and it did very well with the numerically inclined. 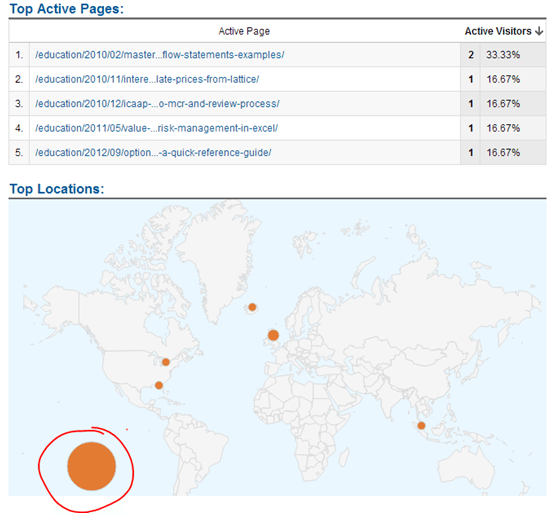 I clicked the ISS blob to see how many readers were actually following and to find out how did they get here in the first place (Twitter, Facebook, Linkedin or Google+).

And presto, it’s Google April Fool prank for weary web masters across the world. 41 readers from the International Space Station (ISS) who found us through the key word April Fool.

(Interestingly enough the ISS Google Analytics blob moves across the Analytics world map mimicking a fast tracked (but inaccurate) trajectory of the ISS in Earth’s orbit.)

Thank you Google for an early morning laugh. Much needed and appreciated. Good to know that you think of us even when planning pranks and hacks for Aprils Fool day.

This was so much more memorable and refined than the “YouTube is shutting down” hack from a few hours earlier. Here is a full list Google April Fool 2013 Hacks from TNW.