Just a quick heads up. I have been shooting landscapes for a few years now. Thanks to my friend Jehan, I got hooked on to DSLRs a few years ago. As you may have gathered, I also travel a bit and have been to some interesting corners of the world. Here is the part that I wanted to say before you read on.

I have never shot landscapes like these. I know I have seen some amazing places but this stuff just took my breath away. Continues to take me breath away even today as I worked with these images for this post, four months after the trip. And yet they don’t do justice to the images I have in my mind, that we saw as a together as a group.

If you have the travel or nature photography or treking and hiking bug, do yourself a favor. This summer pack your bags and head to Skardu the first opportunity you get. It is a truly magical land where the magic is the slow release kind. You don’t notice it creeping up on you and then suddenly you are gone.

Our day started at 4 am. It had been a long trek the day before. We had left home at 2 pm, flown from Karachi to Islamabad at 4 pm, landed at 6, reached the hotel by 8 and only had time for a quick dinner before crashing in our rooms for a short sleepover before our phone alarms started beeping again.

Our PIA flight to Skardu departed Islamabad at 8 am. We checked out from the hotel at 5:45 am and waited for our ride to the airport. Our carefully scheduled prior booked planned van from the night before had been hijacked by another group also rushing to the airport, in a case of mistaken identity.

The transit to Islamabad airport in the morning suffers from a unique phenomenon called the route. It refers to a VIP movement and there are quite a few of those since Rawalpindi is the seat of GHQ and Islamabad is the seat of the government.  When a route is called the road to the airport is blocked to facilitate transit of said VIP’s. Which means you may leave your hotel at 6:30 am but if you get caught in the “route” trap you may still miss your flight.  Routes are likely to be called early morning or late evenings.

We were lucky this morning since the missing van appeared to be the only bad break for the day. Weather was clear in Pindi and the forecast for both Gilgit and Skardu was clear for the day.  Still there was an air of anticipation at the airport because flights to both Gilgit and Skardu frequently get cancelled or rescheduled because of changes in weather conditions. With the introduction of the new airbus service to Skardu, things have improved dramatically but there are still bad days and cancelled schedules. Till you board and are on the runway you don’t know if you are actually going to get to take off or not. The first good sign in the morning is that they have started check in, the second is the loading of the luggage in the aircraft, the third and final one is the boarding call.

7:45 am the boarding call came and we were all set to go. A few minutes after 8 we were heading towards the runaway, waiting for our turn to release the breaks and speed on towards Skardu. 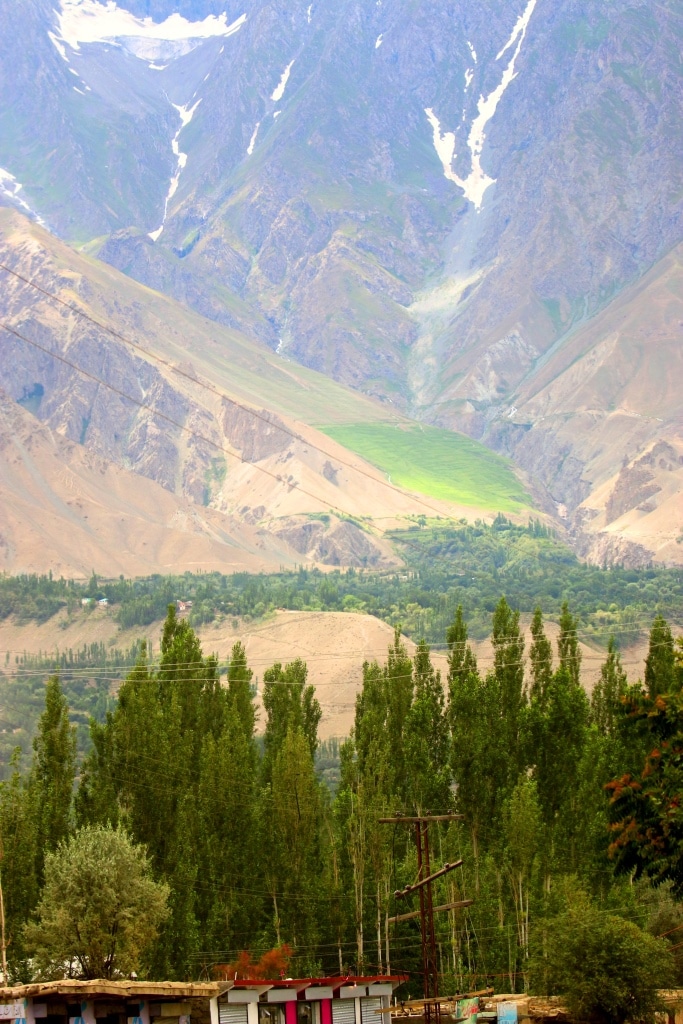 It is a short flight, more so on the new airbus A320. Fifteen minutes before landing you run into the majestic peaks of Gilgit Baltistan – K2 as well as Nanga Parbat. Book a seat by the windows if you can and have your camera ready and focused for instant photography because the sights are truly majestic. You won’t get a chance to click them on the way out because the path is different and camera are only allowed after the aircraft has reached a certain altitude.

Skardu airport sits in the middle of a valley surrounded by smaller peaks and mountains. Which is the reason why cloud cover and bad weather leads to flight cancellations. 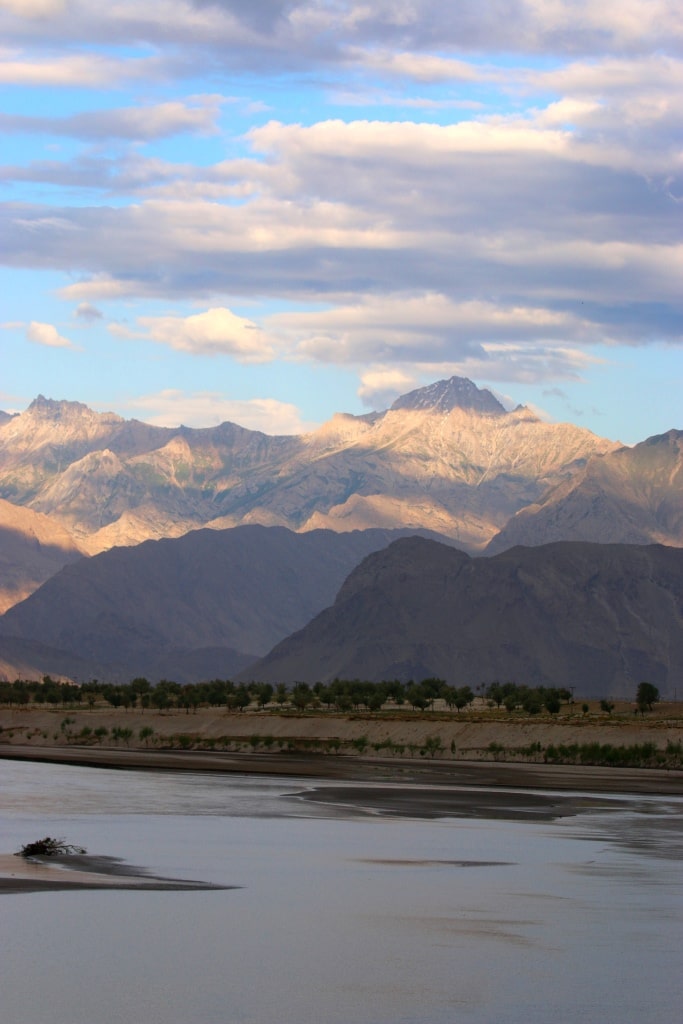 As we disembark from the aircraft the runaway is unexpectedly warm. We are at an elevation of 8500 ft but it’s the middle of July. Skardu interestingly enough is one of highest elevation desert on our planet. Which is what makes it even even more magical. Within the span of a few miles you run into dried river bed, overflowing river banks, flowing sand dunes, wheat fields and apricot orchards, barren mountains and an explosion of greenery where the barren landscape meets the river.

The region only gets two weeks of summer and we have decided to land in the midst of those two weeks. It takes an hour for the baggage trolley to arrive from the aircraft and we finally step out of the arrival lounge.

Serena had been kind enough to send a van and two jeeps to pick us up from the airport. The ride to Shigar Fort is roughly 45 minutes. We had landed on a good day and are out early enough so there isn’t too much traffic on the roads heading out of the city.

If you have been to Gilgit and Hunza, you would understand what I am going to say next. As soon as you cross the Raikot Bridge, leave Kohistan and cross the first tunnel that marks the entry towards Gilgit, the magic starts. You are surrounded on all side by majestic sights, of grey slated river planes  colored rust yellow and green by wheat and potato fields, backed by a canvas of snow covered peaks.

The Skardu side of the province of Baltistan is not like Gilgit. Here the magic take a while to set in. If you are expecting Gilgit you keep on waiting for the peaks to appear so that you can shoot them. And then you suddenly realize that the magic has been with you all along. For us that moment happened at the half way mark to Shigar when we finally woke up to the landscape around us. 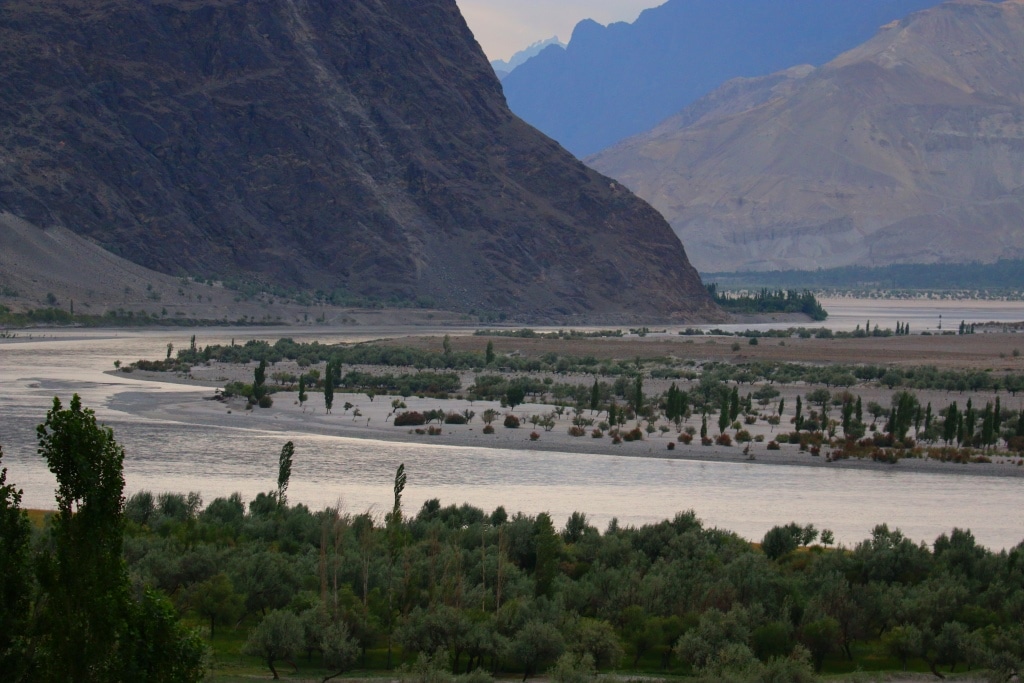 Shigar Fort is a 400 hundred year old royal palace and fort on a rock that was restored by the Aga Khan Foundation and turned into a residential hotel, a museum and tourism destination site in the region.  Over the last few three years it has become an important source of revenue for the small town that houses the royal palace and fort.

As soon as you land at Shigar Fort you are greeted by the stream that is running right next to the Palace. There is a dining area roofed in by grape vines that in July have just started to sprout fruit. The dining area opens into what used to be the palace court yard and now serves as a large open ground with sitting chairs and loungers for both hotel guests and day visitors.

Our group immediately breaks into multiple exploratory parties. The setting is intriguing, the history appealing. Sipping our glasses of freshly strained apricot juice we take our seats by the stream and settle in for check in to be completed for our large group.

It is only when we get to the rooms allocated to us in the old Fort that we realize how unique the entire structure is. 400 hundred year old design and architecture made livable for our generation with twentieth century amenities.  The rooms are gorgeous.  Since we have three sets of grandparents with us, we have split up into two groups. Grandparents in the new block, also known as the garden suites; parents and kids in the old fort which is difficult and awkward to climb for the elderly. The historical suites have their own magic. The largest two are the old raja and rani rooms and over the next 24 hours we get a taste of the royal life.

While the rooms in the old Fort have their own splendor, the garden suites open into the Royal garden. Entry into the royal garden is limited to house guests only so you won’t see tourist traffic spill into this quiet corner of the hotel.   It’s a large courtyard with a small pool and gazebo in its midst sprinkled with cherry, apricot, pear, apple and mulberry trees. Over the next few days as we check in and out of Shigar on our way to Khaplu and then the airport, the Royal garden becomes the place where grandparents and children hold court together.

The first order of the day is to check in, unpack, order lunch and head out for our first day trip to the Shangrilla resort and Upper Katchura lake. We are only in Shigar for a day on our way to Khaplu and the group wants to make the most of that day.  It is going to be a long two hour drive since we will have to head back to Skardu and then move onwards first to Shangrilla and then Upper Katchura. While the roads are metaled and the jeeps arranged by Serena comfortable, the ride back and forth to Shigar extracts quite a toll from the tail bone. 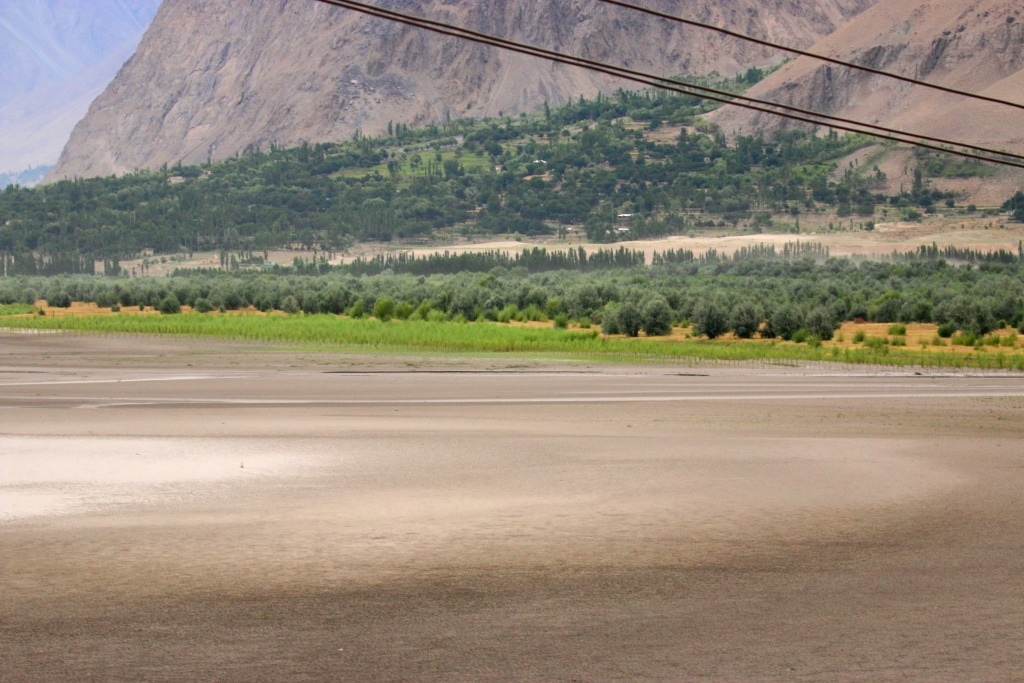 But the drive and the sights on the backdrop of the setting sun are unbelievable. One minute you are with civilization, the next teleported to a mystical medieval land where rajas plot and conspire with each other, where armies weave their way through snow covered mountain passes, where stone forts and palaces hold sway over kingdoms of fruit orchards and river beds stand witness to battle lines and cavalry charges.

Where despite the passage of time wild wheat still grows in full bloom.

The drive also yields half a dozen boxes of cherries, a few packs of sweet dried mulberries and almonds in paper thin shells (Kaghzi badams) ready for peeling and consumption. But the dozen National Geographic worthy shots with my camera are the real payoff for the day.