The iPad application that is trying to teach computational finance to the world.

Let’s get all the weird stuff out of the way first. 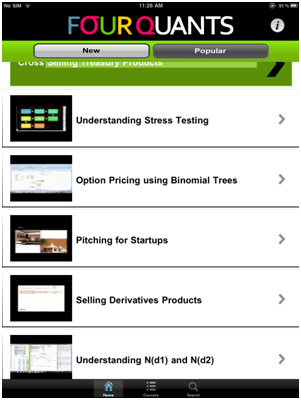 A four man team based out of a bungalow in Karachi is doing interesting stuff in Finance. They are trying to teach it to the world.

What started off as a personal journey to understand why oil hit 147 dollars in 2008 and why the global financial crisis brought the world down on its knees, quickly turned into an exciting adventure. An adventure that has so far generated 60 plus courses and 50 odd video sessions dealing with the truly exotic (understanding Nd1 and Nd2) as well as the very basic (Financial Modeling). 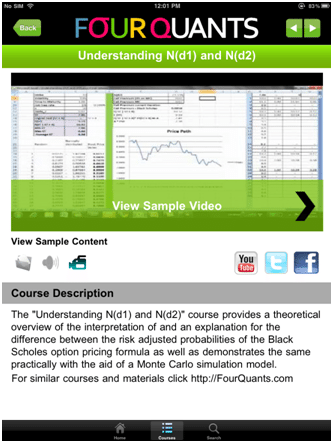 Along the way inspired by Fashion TV the same group did a pun on FTV and created the FinanceTrainingVideos channel as a joke. The joke became a runaway success growing to about 3,000 video downloads a month. Not a big number till you consider that the most popular segment is devoted to calculating Value at Risk and option pricing.

300,000 page views later four people that include a social media expert, a Columbia MBA, two actuaries, one architect, a FAST graduate, two cuckoo birds, a pair of Mynahs and a bunch of crows (that you can hear in some recordings) introduced an iPad version of their app last week. The FourQuant iPad application right now allows free access to the 54+ videos on the FTV Pun channel and will add the ability to buy and download full length courses in the upgrade due at the end of the month. 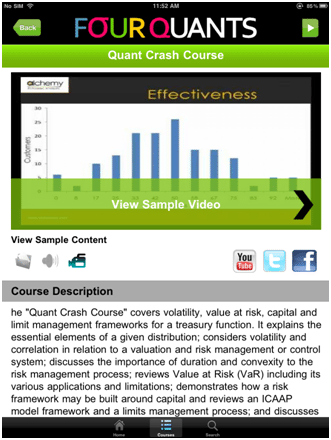 a) A complete 4 hour series on Pitching for Startups

b) A complete first session on introduction to financial modeling 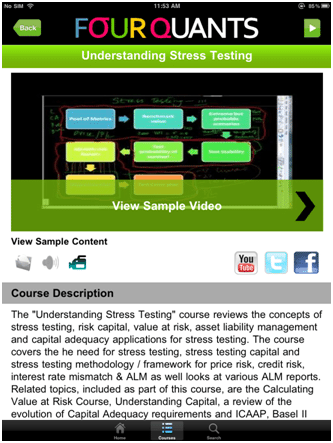 The intended audience is anyone with an interest in Finance. Doesn’t matter if you are business school student in search of that elusive grade in Finance, a regulator evaluating the impact of a discretionary parameter, a consultant looking to finetune your model, or a board member trying to decipher the greek, your quants have been shipping your way.

Using an easy to understand hands on manner, the team behind FourQuants.com and FinanceTrainingCourses.com has already served customers from 162 countries and 5,000 cities across the globe through their two year old website. They sell downloadable pdf guides, sample excel model templates and for the truly passionate finance user a subscription to their high end enterprise learning portal dedicated to risk, pricing and treasury management.

As Jawwad puts it, “Ultimately people need help in building models, validating models and explaining models to people who don’t come from a financial modeling background.  We have been doing just that for the last 10 years as part of our risk practice. While we do very well with our site, the smartphone and tablet market was the next big thing. It was right there in front of us and we took it.”

Given that Jawwad also teaches Entrepreneurship side by side with Risk and Derivatives at the SP Jain campuses in Dubai and Singapore it was only natural to expect him to sneak in a course on pitching. The four hour series hidden under the Pitching for Startup category comes in two parts. A pitching case studies session for those running short on time and a 3.5 hour pitching framework course that walks you through the process of building a pitch in 5 easy steps.

The iPhone, iPad and Android apps were built by Pepper.pk. The award winning m-application studio run by Five Rivers Technology in Lahore.  FourQuants and Pepper met as mentors and mentees at the Asia Pacific ICT Awards in Pattaya, Thailand in November 2011 and hit it off immediately.

Why Karachi? “The talent available in this city is just amazing. We see so many bright kids who are hungry to learn more about computational finance and share what they have picked up.  They have the basic skills, they have the aptitude and they want to learn. Then there is the clustering effect. [email protected] has done an amazing job of highlight and connecting companies doing great work in their sectors. It is just a natural evolution for some of the brightest minds in Karachi and Lahore to sit down, collaborate and build something new and exciting.”

Jawwad also talks about the importance of Finance, the impact Columbia Business School made in his life and the Salman Khan (Khan Academy) factor.

“My first two electives at Columbia were International Marketing (Don Sexton) and Emerging Financial Markets (David Biem). They were my first exposure to a truly world class faculty. And I remember asking myself twelve years ago that if I could just take a fraction of the knowledge they had shared in those 36 hours with the rest of the world, with others who couldn’t afford to be in New York or work with Don and Biem, I would change my small part of the universe.”

“I have been teaching as an adjunct faculty since 1995 and a Treasury Risk trainer since 2003 but it was Salman Khan’s Academy that really showed all of us the way forward. Once you saw Khan Academy you knew exactly what you had to do and Salman was kind enough to share and show us how to do it.”

The different flavors of the site are incredibly sticky. The free editions average 3 page views and 3 minutes per visitor. The paid enterprise edition average 8 page views and 15 minutes per visitor. The bounce rate is running under 20%.  There are visitors on both sites who spend as much as 2 hours at one go reading and downloading the free finance content.  Jawwad says, “I wrote the content to teach my treasury and EMBA students as well as my team members. Selling it to the world was an afterthought that turned into a business.”

And so in a library that doubles as a makeshift recording studio, on a Lenovo tablet that has now traveled the world, this group of unlikely candidates is rewriting the rules of teaching Finance.  And succeeding  – with customers putting down dollars for their content from as far away as Peru and Panama to Boston, London and Berlin.  They have crashed two north American hosting providers and have had to move servers twice in the last four weeks. Traffic is doubling up every month with US, UK, India, Canada, Singapore, Australia and China contributing the largest chunk of page views.

Where is Pakistan on this list, you ask. At number 5, replies Jawwad. A teacher should teach the world, not just his neighborhood. Thanks to Salman Khan, we now know how. 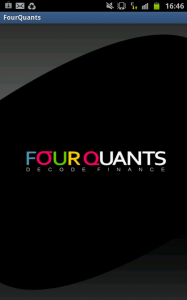 1 thought on “The iPad application that is trying to teach computational finance to the world.”