On day one of our risk management course, we completed a quick review of basic financial risk concepts. The objective was to introduce the relevant tools and frameworks we could use for the Jet fuel hedging case discussion scheduled for day two.

One caveat on the data front. The day one data set already shared include two relevant time series. One is the WTI Crude Oil data set while the other is the Fuel Oil data set. Even though Fuel Oil is not Jet or Aviation Fuel it has long been used as a proxy for Jet Fuel. From a hedging point of view, airlines have generally used a mix of Crude, Fuel oil and Aviation Fuel contracts to hedge their exposure.

The recommended reading list below provides coverage of two points of views when it comes to fuel oil hedging.

There is the US Air point of view which says that liked FedEx and UPS it is best to simply pass on the increase in Fuel costs to the consumer through fuel surcharges. That such an approach is far superior and rational than the costly and sometimes deadly fuel cost hedging programs. The alternate point of view is the Southwest and Delta perspective which is that hedging program when executed and timed correctly create tremendous value for the airline and can actually become a source of competitive advantage.

For the purpose of the case discussion, there are four primary questions that need to be addressed

a) Should you recommend fuel hedging or not?

b) if yes what is the risk exposure of the airline and the resultant impact of the exposure on profitability?

c) How is that exposure managed and reduced with the fuel hedging program?

e) What is the correlation between Fuel Oil and Crude Oil prices? Which one should you use to hedge your Jet fuel exposures?

d) What is the probability that the airline profitability and margins will turn negative due to a rise in fuel oil prices in the absence of the hedging program?

During our second session, we will attempt to answer and address these questions one by one. But first please go through the recommended reading list.

Let’s start with correlations. In the primary data sheet, we have daily price movement and return series calculations for both Fuel Oil as well as WTI. We use that to calculate trailing correlations on a 10 day basis and see the following trend. If you were thinking about using WTI to hedge Fuel Oil exposure, the graph below is not encouraging. Not encouraging because correlations are all over the place, but also because they tend to be clearly negative.

But part of this problem is the time horizon used. If you use average monthly Aviation fuel prices, the picture changes dramatically. Which one of these two images is accurate and correct and which view of correlation is the right view. The 10 day trailing correlation above or the end of the month average correlation below. One of the assignments for day two is to solve this riddle.

To answer the above question we rely on the same technique we used on day one. A quick visual eyeballing of the return series for the three candidates – Fuel Oil, WTI and Jet Fuel. It will allow us to get a better for the three distributions as well as their similarities. Our data set as far as this case discussion is concerned goes back to about 3 years with monthly data points leaving with 36 points of information in our data set. 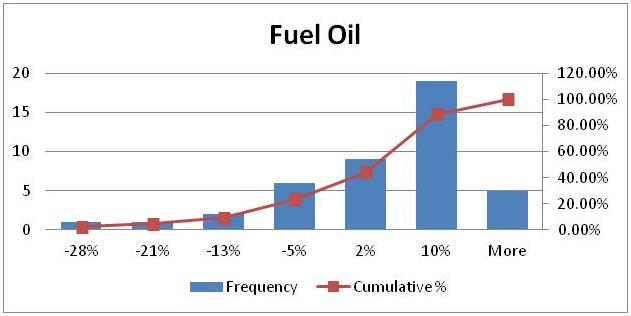 To keep things simple let’s assume that we like the correlation and the fit between Jet Fuel and Fuel Oil and decide to use the Fuel Oil series as a hedge for our purposes. We also use value at risk (the VCV approach) to calculate the maximum change in prices that we expect to see on a monthly basis and get the following numbers.

These price shocks, however, all assume a standard average volatility world. From a risk point of view, we would like to use the maximum volatility level we have seen in times of stress that use that as a basis for our calculation. The tool that we use is the probability of shortfall which is a variation of the break even method we are all familiar with from our Micro Economic days. However, in shortfall rather than focusing on what volume or numbers it would take for one to break even, we focus on what price shock it would take to push profit margins into negative territory.

For our case, we assume that a 40% increase in Jet Fuel prices without an ability to pass the same to the consumer in the form of fuel surcharges would prove catastrophic for the airline. It would eat away all of its profit margin and a large part of its free cash generation capacity. The catastrophic impact would occur because a change in ticket prices would reduce air travel and volumes, budgeted revenues and impact the ability of the airline to service its debt obligations. Leading to yet another round of bankruptcy and restructuring. 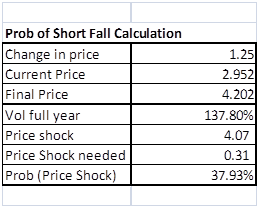