While some of us thought that Barclays Bank would actually go under at the height of the Libor crisis here on this site, it appears that we were over optimistic. Out of curiosity as part of the recent Advance Risk Management workshop I ran, my MBA students did a brief class project comparing probability of default (PD) trend-lines for 4 of the big BBA USD Libor Banks. We are all wondering if they should even investigate the possibility of working for Barclays Bank in the region. 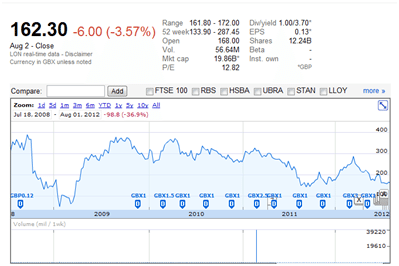 Here are what the results look like for Barclays PLC. While there was some excitement in November 2011 and then again in early July when the LIBOR crisis broke, it appears that volatility due to the LIBOR crisis is dying down and with it, so is the PD trend-line. 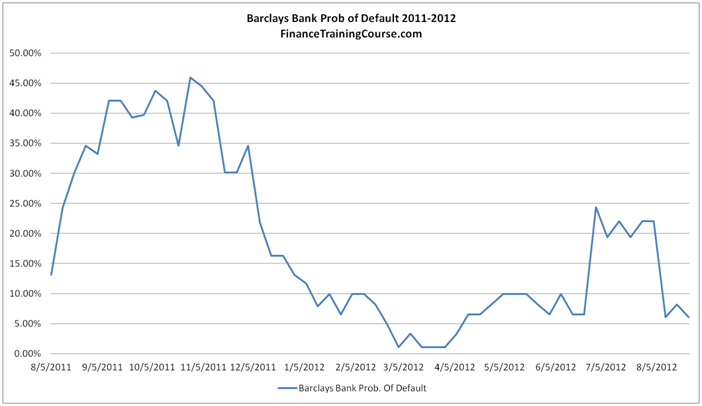 A similar but limited trend-line was also drawn for the other 4 large banks (out of the 18 BBA USD LIBOR Panel members) and unfortunately the most promising of the lot (for us “Dooms-Dayers”) is still Barclays Bank PLC. The biggest surprise in that list is JP Morgan Chase which we thought would be trading beneath HSBC, when it came to our Probability of Default (PD) trend line.

The analysis was performed using the Merton structured approach using listed securities data for each of the 5 USD LIBOR BBA Panel Banks and their publicly disclosed financial statements. The Merton structured approach uses listed securities information, estimated equity volatility, transforms equity volatility into asset volatility and then uses asset volatility to estimate distance to default or probability of default for the public entity being evaluated. A similar model is used by Moody’s KMV to estimate probability of default from publicly listed rated clients.

To learn more about the approach, keep an eye out at our Advance Risk Management workshop or go directly to the Merton Structure approach PD study note for more updates this weekend.