To review the various types of interest rate models read the following course:

In general the inputs into a BDT model are the initial continuously compounded zero curve rates and their volatilities.

The zero curve rates may be derived from par yield rates. For our illustration we have obtained historical rates of US Daily Treasury Yield Curve Rates available on the US Treasury Departments website. We have assumed these rates are at par and we using the bootstrapping methodology to determine the zero curve rates. To review how to derive zero curve rates from the par term structure you may consider looking at the following posts:

The zero rate derivation methodology above produces annual effective rates. To convert to continuously compounded rates we apply the transformation:

To calculate the spot rate volatilities we repeat the above process for a selected window of historical
YTM data. Once this has been done, for each tenor, we determine a returns series by taking the natural logarithm of the ratio of successive rates. We then calculate the standard deviation of this return series and scale it by number of (trading or calendar) days in a year to get annualized returns. Read more on how to calculate volatilities from historical time series data here. 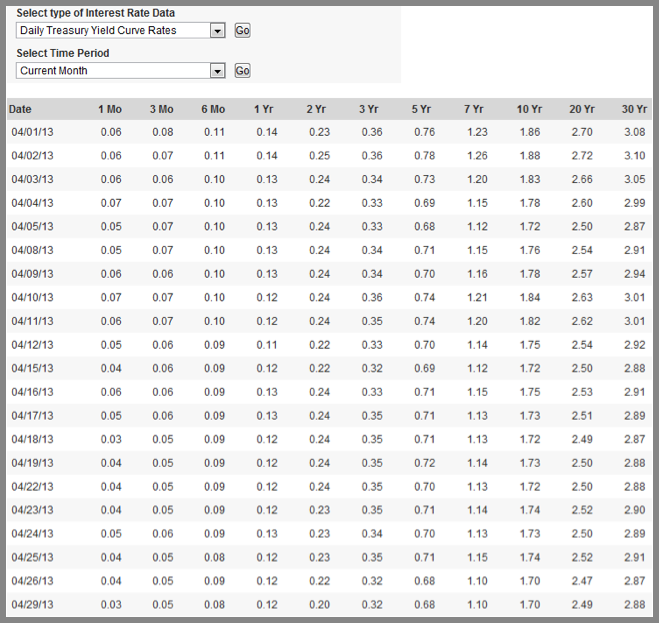 Source: US Department of Treasury (http://www.treasury.gov/resource-center/data-chart-center/interest-rates/Pages/TextView.aspx?data=yield)

and the methodology mentioned above, we have derived the following input values for the BDT model:

We have constructed the BDT model for semiannual frequency and for times 0.5 to 5.5 following the procedure outlined in the course:

How to build a Black Derman Toy (BDT) Model in EXCEL

After running the solver function we arrive at the following output results for the median rates and sigmas that satisfy the defined constraints:

In order to test the calibration of the model, the output was then used to price 2-year, 3-year and 5-year US Treasury notes as of 29-April-2013. To review how the outputs of the BDT model may be used to price bonds refer to the following course:

How to utilize the results of a BDT interest rate model

Observed and BDT model based prices are given below:

While the results produced by the model are relatively close to those observed, the BDT model is not exactly calibrated to US Treasuries as of the valuation date. If the model were used to price other fixed or floating rate instruments that are not as observable or liquid in the market as these Treasuries, it may lead to results that are not completely fair as the model has not been adequately marked to market in relation to observable and liquid market instruments.

An alternate method of calibrating the BDT model to produce results that are consistent with current US treasury bond and note prices, is to calibrate the same to minimize the difference between the two sets of prices. The BDT model is constructed in the same manner as described above, but there are a couple of changes made to the way Solver is set up and run.

Prior to setting up Solver, it is important to call the results of the observed and BDT-model based prices to the same tab in EXCEL where the output results and constraint cells of the BDT model are present, otherwise Solver will not run. In our illustration we have two sets of prices for 2-year, 3-year and 5-year US Treasury notes: 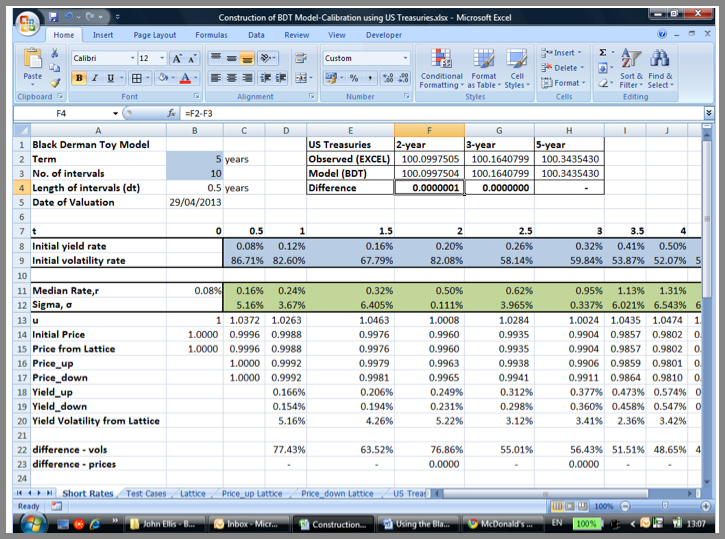 Take the differences between these two sets of prices as shown is row 4, columns F, G and H above. We have used a 3 point calibration of prices but you may choose to use more or less accordingly.

The problem will now be set up in Solver for given ranges depending on the number of tenors (at which observed and model price differences are calculated) used for calibrating results. For each range the target cell for the Solver function will be different.

For the range 0.5-2 years the target cell will be the difference between the observed and model prices for the 2-year bond which will be set to a Value of Zero. This will be done by changing the median rates and sigmas for this tenor range while ensuring that the prices obtained from the price lattice equal the initial prices. Note that volatilities from the lattice are not constrained to the initial volatilities derived from historical time series data as before. 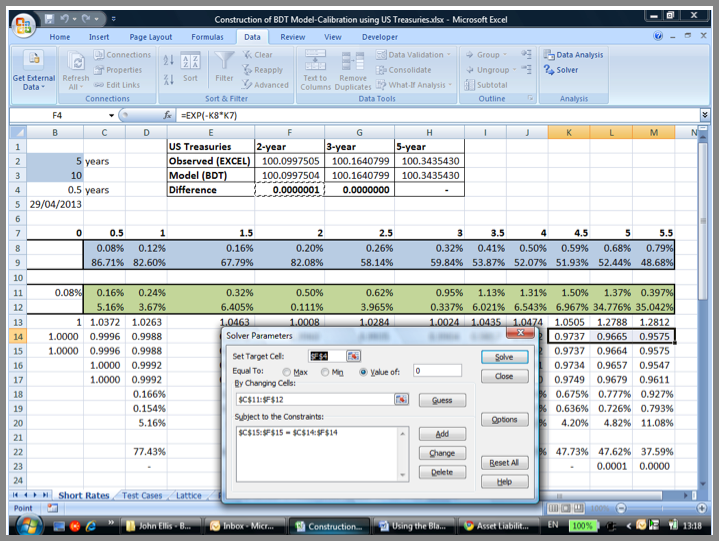 In this case we can truly say that the BDT interest rate model has been marked to market as of 29-April-2013, the valuation date.