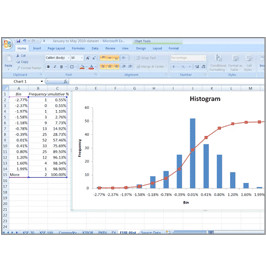 The course begins with a quick review of the various Value at Risk (VaR) calculation methods before moving on to a step by step calculation of VaR under the Variance Covariance (VCV) & Historical Simulation approaches for a simple portfolio of securities. The limitations and related caveats pertaining to the use of this risk metric are then discussed. This is followed by a more comprehensive walkthrough of how VaR may be calculated in EXCEL using the VCV, Historical Simulation and Monte Carlo simulation approaches. A comparison and discussion of the uses of other VaR related metrics such as Incremental VaR (IVAR), Marginal VaR, Conditional VaR and Probability of Shortfall are also covered. The course concludes with applications of VaR in non-traditional areas. Three case studies demonstrate the use of VaR in forecasting the margin shortfall problem within the oil, gas and petrochemical industry; in estimating price shocks for jet fuel & shortfalls in profit margins; and in determining margin requirements for hedge funds in prime brokerage together with estimating their probabilities of default (PDs) and losses given default (LGDs).

After taking this course you will be able to:

Save this product for later
Display prices in: USD