The Brexit reference for dummies

The European Union, previously known as the European Commission and before that as the European Economic Community was formed after World War II in 1957 with the objective of providing support for economies of its member states.

The European Union currently comprising 28 member countries (including the UK) allows for the free movement of goods, services and people between these countries without regard to borders. Member states contribute to an EU budget, are subject to common laws and regulations that level the playing field across the individual economies, and receive support from the EU’s common budget for certain sectors and development projects. 19 of the 28 countries, not including the UK, have also adopted a common currency, the euro.

An exit from the EU would impact the UK in a number of areas: 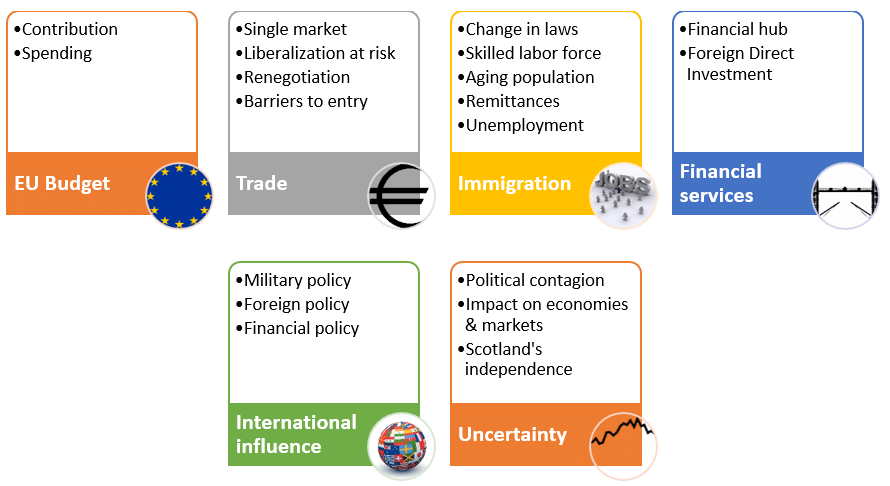 The UK joined the Union in 1973 and plays an important role in the EU as an advocate of trade liberalization in the area and beyond. Exit from the EU would significantly impact other liberal members’ ability to successfully counter or vote against illiberal policies put forward by countries less inclined to the UK’s view of a free market. If the UK wants to continue freely trading within the EU it would most likely still be subject to EU rules for such trade but no longer have the ability to influence future changes to laws and regulations that govern EU member states. On the other, UK would be able to negotiate on its own terms with non-EU counterparties such as its older commonwealth partners, without being subject to the EU’s standards and regulations.

The cost to the other EU countries who rely on exports to the UK would also likely increase. Trade deals would need to be renegotiated. While UK a proponent of free trade may still want access to the single market it may not be willingly to adopt EU standards and regulations without being able to influence them. This would likely result in restrictions such as import tariffs to protect sectors for which it is not able to negotiate favourable terms, thus increasing the costs of the exporting EU countries to these sectors. UK exports which have benefited in productivity from the economies of scale of being a part of a single market would also suffer as it loses this competitive advantage.

UK is a major net contributor to the EU budget. 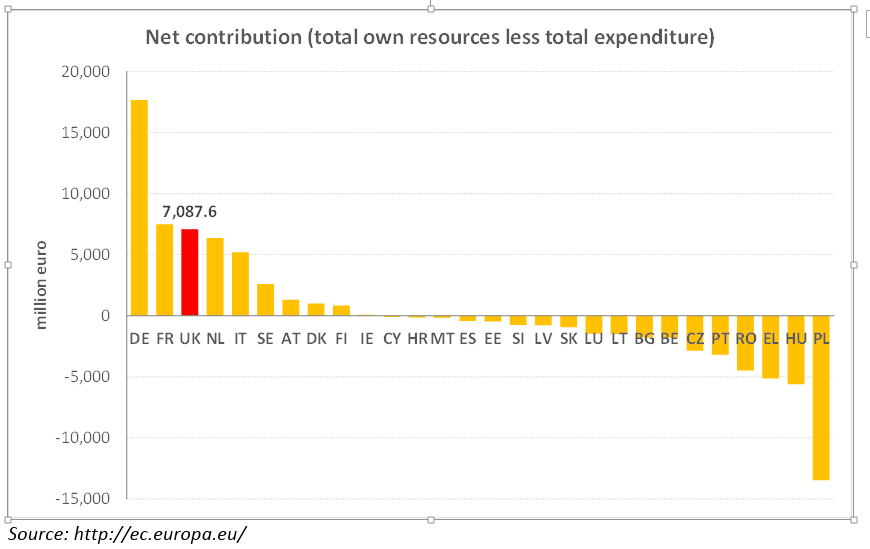 Of the total amount that it pays the EU, it receives in return, monetary support of its agricultural sector as well as for development projects and as a rebate. From the UK’s perspective this amounts to 1% of its government spending that can be redirected towards benefiting the British public but its impact could be limited by Brexit’s aftermath on UK’s growth and tax revenues. Other EU budget net contributors would need to dish out more in order to meet the 6% vacuum in the EU expenditure that Brexit would create. Alternatively a reduction in EU spending could hurt net recipients such as Poland if the EU decides on trimming spending.

International influence of the EU would likely be weakened as the UK is a major force behind EUs positions in particular with regard to military, financial and foreign policy.

The Future of London as a Financial Hub?

London has become a major financial hub for the world’s largest banks and financial service institutions housing corporate headquarters and employing thousands, as it is viewed as a gateway for entry into European markets. In addition it receives the largest amount of foreign direct investment from the EU members. With its exit from the EU, it is likely that some of these  institutions will move partial operations and investment from London to alternative venues such as Frankfurt, Dublin, Luxembourg, or Amsterdam so as to maintain their ability to sell services cross border between member states without the need for satisfying additional legislation.

However opinion about London’s future status as a financial status is surprisingly clear. There is no immediate threat of a change in that status but there may be a few hiccups. Given the dominance of English law in financial contracts and the existence of over a thousand year of history, case law and precedence when it comes to enforcement of financial contracts, the London will continue to remain the primary financial center. In addition, from a life style point of view, London offers much richer choices compared to mainland Europe and senior banking expats prefer to live in England compared to France or Germany.

However some Euro centeric positions, roles and groups may move to Frankfurt. There will also be some challenges at the board and policy level for EU based banks when it comes to evaluating the future attractiveness of London as a central hub.  European boards are now likely to vote against additional expansion or investment in UK operations. Finally when it comes to future expansion the uncertainty caused by the vote, would lead to at best a deferral or at worst alternate choices for a number of financial players.

This could hamper growth and reduce the amount of skilled labor and FDI flowing into UK markets. While Germany, Ireland and the Netherlands could benefit from an exodus of these jobs to their cities, the transition is not without its cons for the retreating entities. Stricter tax and labor laws, reduced hour work weeks, limited office space and social opportunities, compensation caps, etc. could add to rather than lessen employers’ problems. UK may also implement competing standards that could encourage entities to retain operations and FDI within London.

Immigration reform and blow back?

Immigration is one of the major political reasons for the Brexit vote. Currently the free movement of people between EU states means that there is a flow from less economically well off member countries such as Poland, Latvia, Slovakia, etc. to countries like UK. While the UK has benefited from a younger skilled labour force due to the single market, resentment has grown principally because of pressure on social services and the housing market from EU’s A8 country migrants. The recent refugee crisis has further exacerbated this issue with a lot of rhetoric for preservation of sovereignty, nationalism and greater control over borders, laws and regulations.

Theoretically speaking, a result of Brexit should have been stricter immigration policy in the UK. While this could assuage the public, it could reduce the competitiveness of the UK market. Realistically speaking to continue to trade with EU on favorable terms, UK would still have to work with broad and open immigration standards. Immediate reality however has been a big spike in xenophobic and anti immigrant rhetoric as the pro voters confuse the 52% vote as a vote in their favor.  While there has been universal condemnation of such behaviour, the unease created by such incidences within the first and second generation immigrant community cannot be denied or ignored.

Brexit followed by the expected resignation of the British Prime Minister David Cameron without invoking Article 50 of the EU treaty, has already spawned uncertainty in the market. 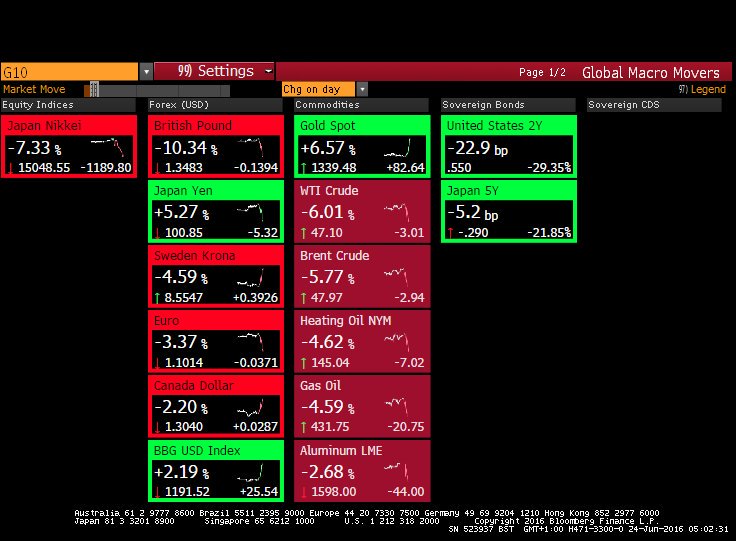 There are petitions for a do-over referendum, speculations as to who will succeed Cameron, and whether or not the said Article will be triggered. In the back drop of this uncertainty, the Sterling fell below a 31 year low to $1.320 and the Dow losing 611 points in a single day.  Global markets have also been hit – Nikkei Stock Average dropped by 8%, the German DAX by 6%, the FTSE by 3.15% while the S&P 500 index was hit by 3.59% on June 24 after the results were declared. 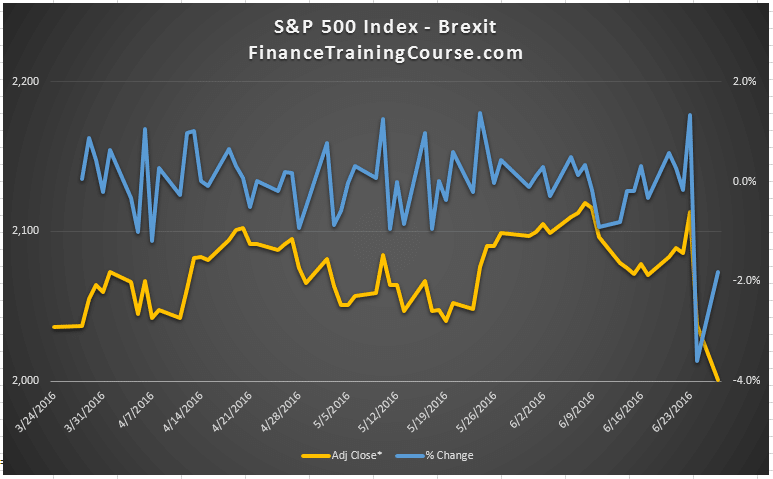 Since then there has been a general movement of investment to safe haven assets such as gold, currency (dollar & yen) markets and government bonds. 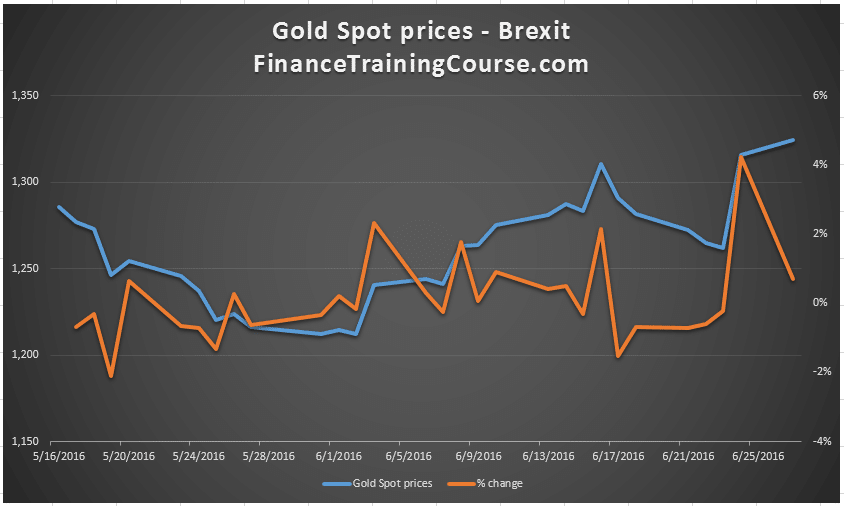 The uncertainty could increase as the successful vote for UK’s exit proves that a ‘leave’ option is a reality for EU member states. Political contagion fueled by recent trends supporting nationalism over globalization, could force more EU member states to explore the exit option. All depends, however on how long it will take for the UK to trigger Article 50, how long it will take to renegotiate the numerous treaties and policies with the EU and how favorable the terms of the new relationship will be for the UK. In addition to all this, Scotland who voted predominantly to stay with the EU now have impetus for demanding another referendum for their own independence from the UK.

While there are question marks post the vote about the political will of the parliament to follow through on the process, the European Union reaction to the vote has been quite severe. Immediate challenges to leadership at both Conservative and Labor parties are now in place. There has been an cut in UK’s credit rating and future outlook by leading credit rating agencies amidst speculation about the future of Scotland remaining UK and the impact of the Brexit vote on the UK currency and economic outlook.

Perhaps the most enlightened and informed discussion on Brexit before and after the vote happened on Quora and Medium. While emotions were given free reign on both platforms, the amount of insight into both camps available for discourse was a grade above mainstream media.

A number of commonly held popular beliefs on both side of the camp have been challenged and answered on Quora and medium and to some extent those insights are responsible for the tone of this answer.  While mainstream media has simplified the perspective reality is a lot more nuanced and complicated. The one surprise has been the partial support lent to the Brexit camp by immigrant community despite the anti-immigrant stance of the main party supporting it.

On a lighter note, lets listen to John Oliver both pre and post the vote results on HBO.

But no external reference would be complete without the Downfall meme for Brexit. Here it is again with the last meeting representing Boris Johnson’s HQ as the EU referendum results come in.