The board of a leading US North American airline has been debating the Jet Fuel hedging question for the last two quarters. As the CFO of your board you have now been asked to provide your recommendations on this topic. You need to address a number of questions such as:

a)   Should Fuel hedging be recommended or not?

b)   If yes what is the risk exposure of the airline and the resultant impact of the exposure on profitability?

c)    How is that exposure managed and reduced with the fuel hedging program?

d)   What is the correlation between Fuel Oil and Crude Oil prices? Which one should you use to hedge your Jet fuel exposures?

e)   What is the probability that the airline profitability and margins will turn negative due to a rise in fuel oil prices in the absence of the hedging program?

The context and data used in the case study are first presented. We look at the distribution of prices for fuel oil, jet fuel and crude oil and assess the historical correlations between these prices. An overview of how the jet fuel price shock is estimated using the value at risk and probability of shortfall approaches and its impact of profit margins is discussed:

Next we build a simplistic simulation model for illustrating the shortfall method. The model links a crude oil price simulation model with the gross revenue generation model of an airline to obtain its simulated profit margins. The distribution of profit margins and the probability of shortfall are then determined and a suitable way of presenting the results along with deciding on which target accounts to focus on is determined:

Finally answers to the board’s additional questions regarding its selected target accounts and the effectiveness of its hedging strategies are presented: 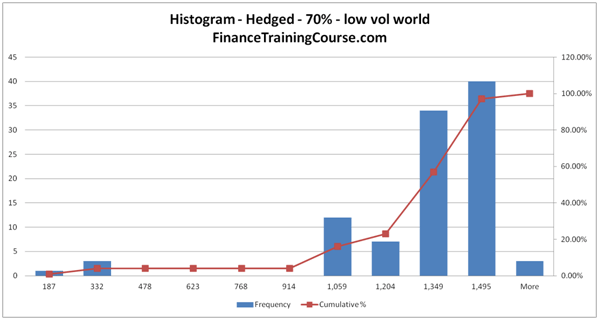