Bank Regulation Failure. How to kill a bank in one day?

Every year just before I wrap up my Advance Risk Management Course, I run a simulation on bank regulation failure & Basel II. The simulation uses four iterations to teach students how to kill a bank quickly, ideally in under 15 minutes, while remaining compliant with Basel II, Pillar I guidelines. By the time they get to the fourth and final round they get really good at vaporizing balance sheets. 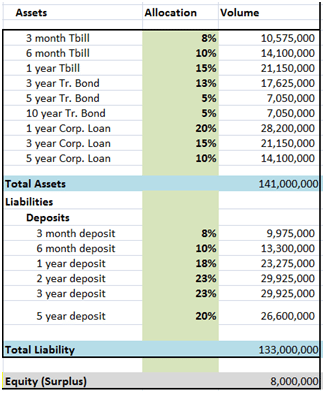 It’s not a very complicated model.

We start with a basic bank balance sheet, distributed across maturity and credit classes. The products are simple long and short term bonds and corporate loans (no derivatives). Funding choices are long and short term deposits (no structures). There are options in the model for setting expected rates volatility, credit losses, provisions and interest rate direction. The stress test scenarios range between high volatility in interest rates and credit losses to low volatility.

We make allocation decisions on where we want to invest and how we want to fund those investments, sometimes based on information shared about the likely future, sometimes blindly. Then we turn on our interest rate, economy and credit provisions simulators. Fifty iterations later we get a summarized output that shows the results of our allocation choices. 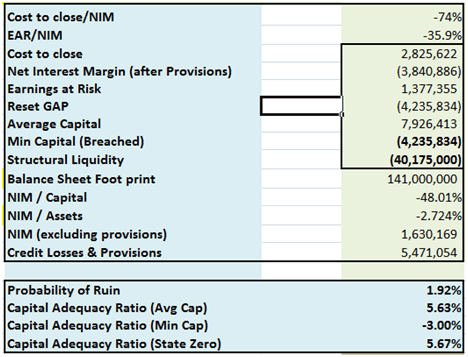 Why these five measures for bank risk, you should ask. 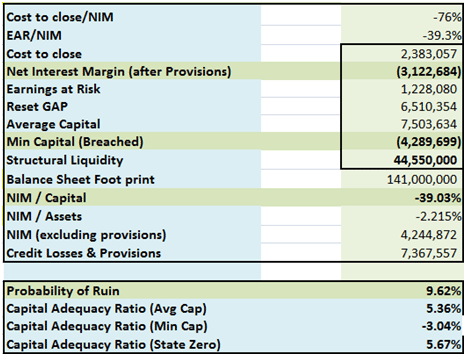 Four scenarios and four iteration later, every student in the class has a dead bank on his resume.

Over the years we have now gotten so good at blowing up banks that I can now script the sequence.

In the first iteration, model volatility gets them, primarily because they trust me with the model. In the second it is ALM mismatch despite the fact that they are now wiser. The third is a breather because interest rate plummet, the economy takes off and credit losses as well as credit spreads tank. The fourth and final iteration is the 2008 crisis. Everything that can go wrong will go wrong. More importantly you won’t be able to shed any weight. The balance sheet married in the go go years will take you down with it.

Everything that can go wrong does go wrong. They have been warned, they understand the model and to their credit they try. Each class has its share of mindsets. The risk averse conservative bankers, the aggressive treasury and portfolio guys, the core lending fundamentalists and the experimental scientists. It leads to some very interesting results and even more interesting conclusions.

Done with their bank slaughter spree I ask them a simple question.

How would you regulate the bank you have just blown up? Could you foresee failure heading your way? What is the one target account you would like to monitor to ensure a regulated bank doesn’t pull a fast one on your watch?

Surprisingly, despite the fact that they have never run a bank (other than their recent exposure to detonating a few balance sheets), the answer is never capital adequacy. Let’s take a look at the simulation output from three scenarios and perhaps you will see what my students see?

The three scenarios and their output that follows include a simplified stress test for minimum capital, a credit melt down and a milk run to paradise where you really have to work hard and get creative to eat up all of your capital. 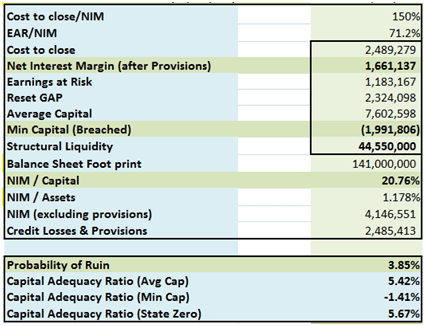 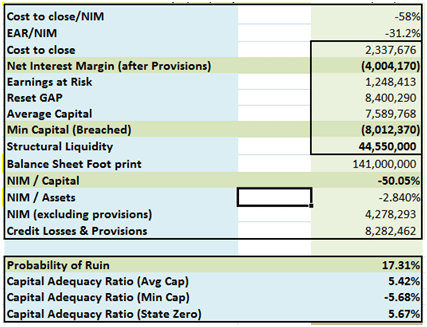 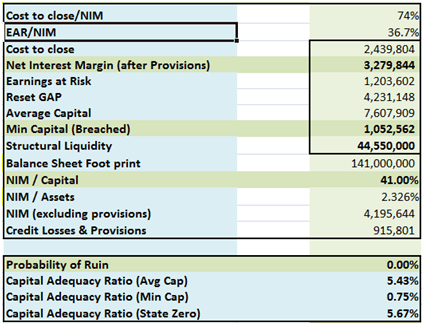 The Bank Regulation Checklist after a lesson in bank slaughter.

A few things should be obvious. 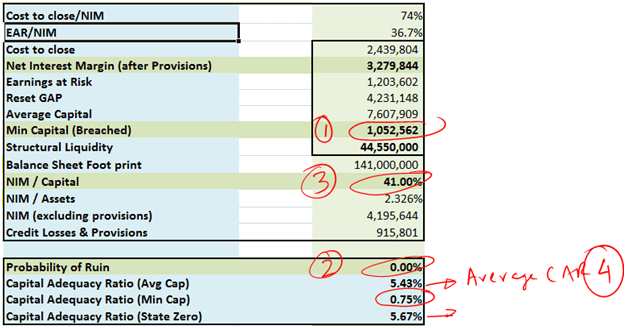 Beyond the above four they also look at NIM after provisions and compare it with administrative expenses to get to the final bank profitability figure. They review structural liquidity to tap liquidity related pressures and play with the provisions figure. But by the time we reach the end of the stress testing simulation they all walk away from CAR.

So if your primary regulatory mechanism is still tracking the average Capital Adequacy Ratio (CAR) because you have bought into the “Basel-II-III-will-keep-us-safe-doctrine” you are a sitting duck. Capital Adequacy Ratios simply don’t move fast enough. They don’t work well in isolation and they are hardly a predictor of the risk on your balance sheet or in embedded in your environment.

Stressed test, projected adequacy numbers and probability of bank failure are a different story and deserve a lot more importance than they get in bank regulation today. But when you chat with bankers and regulators you get a sense that neither side is interested in conducting a real stress test. Bank complain about resources and regulatory burden; regulators complain about push back, timelines and the technology required to monitor results across the banking system. Federal Reserve’s Comprehensive Capital Adequacy Review (CCAR) and Stress Test is as invasive as a biopsy but it’s a much better regulatory tool than CAR. Not just for banks that are in trouble but also for banks that are likely to join the club.

How do you identify bank that are heading for trouble? The answer picked by my students will surprise you. It surprised me.

Over the last two years they have all pointed to NIM / Capital. Too little and you will end up in trouble. Too much and you will end up with trouble. A basic lesson that our grandparents learnt in the thirties but which we all managed to forget and overwrite in the 80’s. You can fly now, but you will have to pay later.

Unfortunately other than the Federal Reserve independent Stress Test, Basel’s Pillar II, Pillar III, ICAAP (the closest Basel II came to CCAR), Stress Testing and Capital modeling and planning guidelines have been enforced and deployed with such a light hand that they have lost effectiveness. Walk into a market that hasn’t been ravaged by the financial crisis and the regulators and bankers will tell you that they work with simple products and do not need a three tiered complex regulatory structure. Please let us focus on doing banking and doing what we do best. We don’t need this complication in our lives.

We are safe, we are adequately capitalized, we are liquid, we are happy with our CAR. We don’t need to be over regulated. In fact throughout the crisis we did well. We were so comfortably capitalized that CAR levels across our banking system hardly moved and we are very proud of that fact.

Sixteen students who blew up four banking balance sheets today in Singapore would beg to differ.