In the past we have looked at Monte Carlo Simulation:
Computational Finance: Building Monte Carlo (MC) Simulators in Excel

We have also briefly touched on methods that may be used to improve the results obtained from this tool. These variance reduction procedures decrease the standard error between the simulated result and the true value as well as converge to the true result at a faster rate:

In the following post we will further elaborate on these methods. In particular we will be looking at the Antithetic Variable Technique and the Quasi-random Monte Carlo method.

First however, we need to set the stage. We consider a European Call Option on a stock whose current spot price is 50. The strike price is also 50. The annual risk free rate is 5%, there are no dividends payable and the annual volatility in the underlying price series is 30%. The option will expire in 0.5 years.

Using the Black Scholes call option pricing formula we determine that the price of the European Call option is 4.8174.

We now use a one time-step or single path Monte Carlo Simulation model to simulate the option price. We execute the calculation for 100, 200, 300…, 1000 runs respectively. We then calculate the average value across the number of simulated runs to determine the estimated value of the option. 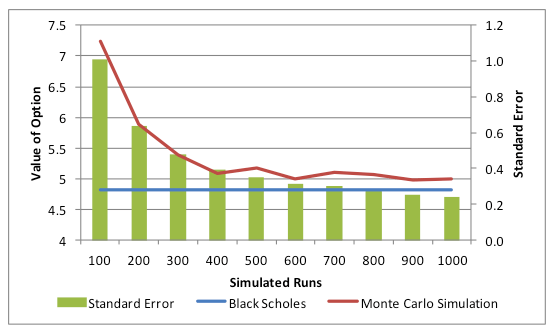 Using this method we have actually doubled the sample being considered for the same amount of simulated runs. For each run we use the original Monte Carlo simulation results along with its negatively correlated result. These are averaged to obtain the result for a given simulated run under the Antithetic approach. This average series of results converges towards the true value of the option at a faster rate than the results from the original Monte Carlo simulation.

We now have two parallel streams of random numbers that result in two sets of simulated prices, intrinsic values and values of options. For each simulated run take the average of the two options values to obtain the result for that run. The results for the Antithetic Variable method are given in the figure below: 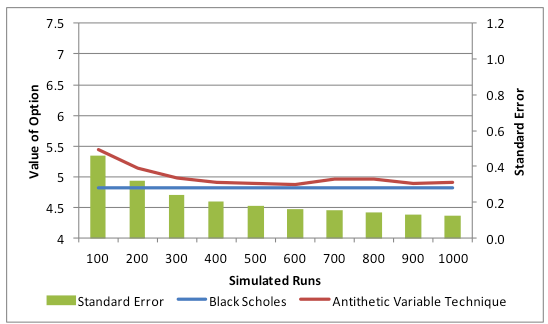 If you compare the standard error terms above (calculated as mentioned earlier, i.e. standard deviation of the simulated results divided by the square root of the number of runs) with the error terms from the original Monte Carlo simulation method, you will see that they are much lower and that the convergence to the true value is much faster.

Finally we use the Quasi-random Monte Carlo method to simulate the results for the value of the call option. Under this approach the random number series generated is actually not random at all but deterministic. We have used the Halton sequence which is a low discrepancy sequence which means that the samples points are more evenly distributed in the sample space.

Unlike a random number series where the data points tend to cluster together, the data points in this sequence are more uniformly distributed in the sample space as can be seen in the diagram below:

In our calculations because we have used only one dimension; the Halton sequence with prime base 2 will be used.  What prime base of 2 essentially means is, we would keep on dividing segments into two portions. The line [0,1] is initially divided into two parts.

The division provides us with the first value of ½. If we had wished for a single value, we would have been done with this step.  The next step is further dividing the segments into two more parts:

This gives a sequence of ½, ¼ and ¾. If we require more numbers we continue with the sequence generation:

This dividing into halves has prompted us to use number of runs as a power of 2. We had used base 3, we would have divided the line between [0,1] in third and would have repeated the process by dividing each individual segment into thirds again.

After normally scaling the values in this deterministic series we calculate the simulated prices, intrinsic values and values of option for each simulated run as we have done before for Monte Carlo simulation and the Antithetic Variable Technique. The results from the Quasi Monte Carlo method are depicted below:

Note that we have purposely kept the axis scales for all the graphs the same so that you can see the extent of the improvement in results. Compare the graph above to the earlier two. You can see that there is a significant improvement in the convergence rate of the results, in particular, in comparison with the original Monte Carlo simulation results.

The data points drawn from the Quasi-random sequence for each simulated run are not independent of each other as is the case for the Monte Carlo simulation and the Antithetic method, but are selected so as to more uniformly cover the entire sample space. Each subsequent number in the sequence is dependent upon the numbers that came before. Because of this dependency, the standard error term cannot be calculated as was done earlier for the original Monte Carlo simulation method and the Antithetic Variable Technique.