This first post walks through the model context and background, while the following posts review the actual model building exercise based on the themes and requiremnts presented here.

Within the airline industry the largest contribution to variable cost is the fuel expense. Airlines use fuel hedges, fuel surcharges or a combination of both to manage the risk of changing oil prices on their bottom line. The objective of the case modelled in the class was to prepare a presentation for the Board of Directors advising them on two primary questions: 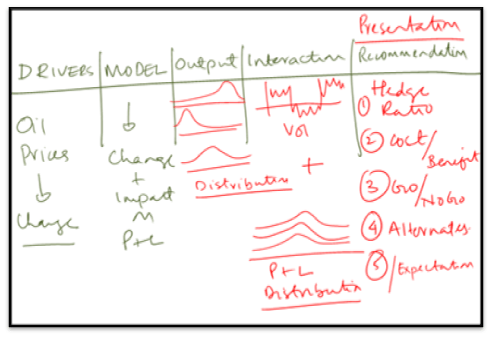 Our initial analysis suggested that the airline was exposed to oil, currency and interest rate risk. However, both volatility and impact on P&L were greatest for unanticipated changes in fuel expenses. This risk was aggravated further by aggressive fuel hedging strategies used by the competition which if successful would leave our client with a significant disadvantage. Compared to oil price risk, the impact of currency and interest rate risk was a small fraction of simulated P&L.

The objective of our model was to therefore: 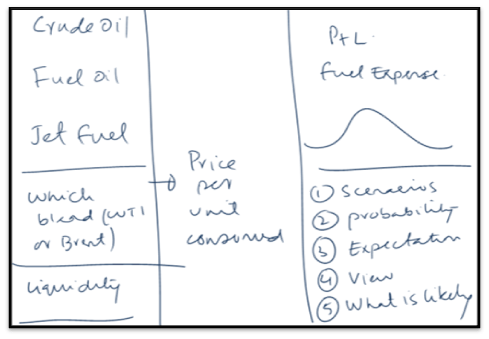 The primary model output required for the above goals was simulating price per unit consumed as well as units of fuel consumed. We decided to use WTI as our primary blend for forecasting crude oil prices. Since the airline purchased fuels in tonnes, rather than simulating price per barrel of oil, our model simulated price per tonne.

There is a strong correlation between Crude Oil, Fuel Oil and Jet Fuel prices and it was decided to create an initial black box for the correlation between these three products. The initial black box would serve as a crude approximation and would be refined later as the model was calibrated to market prices. Initial analysis indicated that while the average correlation was strong, it was not stable and experiences significant instability under times of market stress & volatility. 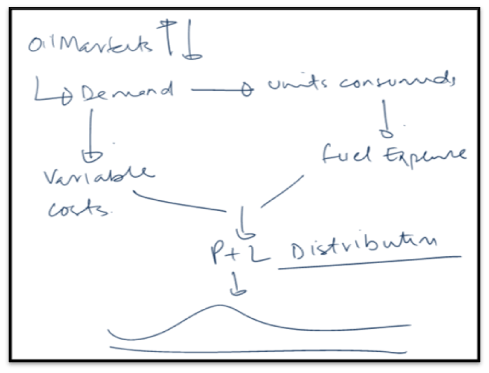 In addition to fuel expenses, we also linked ticket demand (and in turn Gross Reveneus) to changes in fuel oil prices. The assumption here was that higher oil prices beyond a certain acceptable threshold ultimately lead to global recession and lower demand for air travel and vice versa. Also in addition to fuel, other items linked to the volume of flights and passenger miles flown were linked to the demand model. The original demand model is a simple black box which can be upgraded in a later iteration. 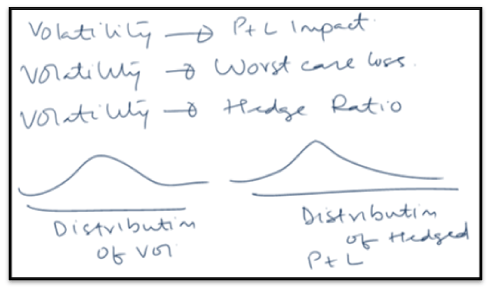 We were also very interested in examining the impact of volatility & correlation on hedge effectiveness as well as the P&L distribution. From a model output point of view this had to be a “must have” requirement without which meaningful and practical recommendations to the Board of Directors would not be possible. 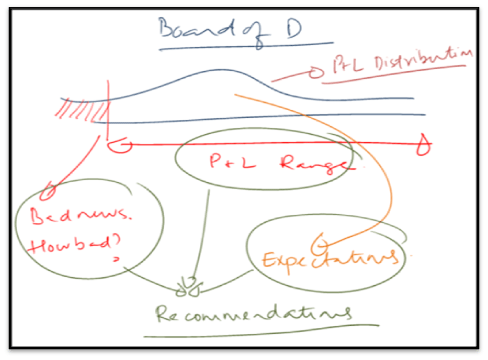 Finally whatever output the model produced had to meet the requirements for a Board of Director presentation. The presentation should present final recommendations backed by analysis generated by the Monte Carlo Simulation model and must: