Checking in from Bangkok. The Fourquants.com and FTC marketing tour of Thailand.

Some relationships begin in exotic locations. Others in odd circumstances. Then there is that small lot classified as destiny waiting in the wings. Our story takes a bit from all three.

Alchemy and Wealth Management crossed each others path on an early morning in February 2006 when we were stepping out of the judging room at the APICT Awards and Somkiat and his team were stepping in. The city was Chaing Mai, the event the Asia Pacific ICT Awards, the category Financial Applications. We had come straight from the airport after a ride of a life time to the venue via Dubai and Bangkok. The Sheraton at 9:30 am after 3 nights of travel and two missed flights was exotic enough for us.

In June of the same year we rediscovered each other as fellow travelers across a whirlwind ride through China. Once again we pitched to a common judge who later became a common friend. Bill Liu, then at Green Dot Capital was finishing with Somkiat and his team when we started hovering in the general neighbourhood. In a dull moment while waiting for something exciting to happen we shared with each other our power point presentations. At the end I looked at Somkiat and said, “I don’t know how, despite the fact that we are competition we need to figure out some way of working together”. 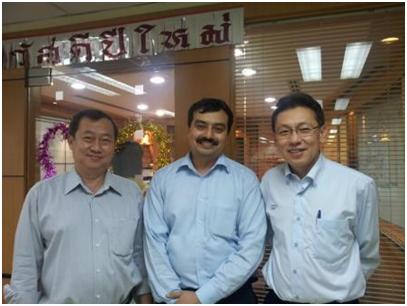 Within a year we had exchanged a trip each to Karachi and Bangkok including a proposal each to a client in our portfolios. In 2007 we ran a joint workshop in Bangkok that was followed by another exciting trip to the Bumrungrad hospital. By March 2008 we had plans for stationing a full time employee in Bangkok, working with Somkiat’s team to sell our technology products in the exotic Far East. Each trip Somkiat’s hospitality and affection would bring us closer to the Wealth Management family.

And then came September 2008. With the rest of the region we took a nose dive that only bottomed out in June 2011. November saw us reconnect again after three years in yet another exotic Far Eastern location and I promised Somkiat a quick trip back immediately after the new year. 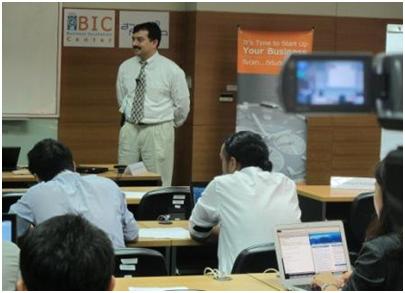 And so I found myself looking at twenty odd eager faces on the morning of 25th January 2012 at the Software Park Business Incubation center in Bangkok.

At a very short notice Somkiat had once again delivered by creating a schedule for us to speak and present at four separate prospects and locations in two days. The software park incubation center was only the first stop.

My three hour session focused on the one reaon why new ventures fail. Their inability to sell and pitch their wares effectively to their customers. While their are many other reasons for failure, the absence of sales is the one that can easily be fixed and is very much within the control of the founding team. Step one on the route to recovery though is to figure out your story and how to pitch it to prospective customers. 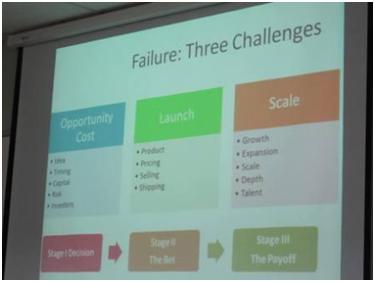 A great pitch is very much like a great Hollywood picture. A plot that engages and connects with the audience. Doesn’t make them guess about the reasons why this picture was made or what it was intended for. Allows them to connect the dots that map the plot in a credible fashion but most importantly clearly states who is the hero and what is he doing on the screen. 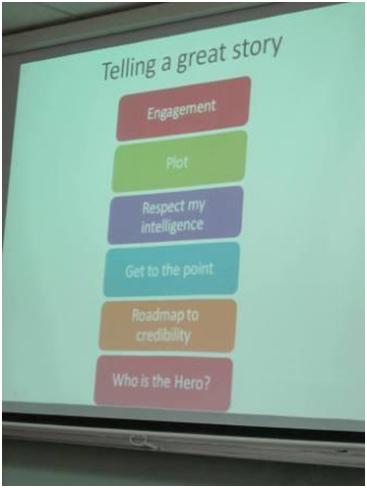 Obviously 2 hours of net session time was not enough to cover every thing we wanted to cover so we passed on a free link to our new Pitching ideas and products for startups series to the audience. Since you are already on this page, please feel free to help yourself out.

We closed with a review of the actual selling process used by private banking teams at large and successful banks. The impromptu session was delivered by Somkiat my partner in crime at the incubation center and the man leading the charge for spreading the word about FourQuants.com and its many amazing products in Thailand. 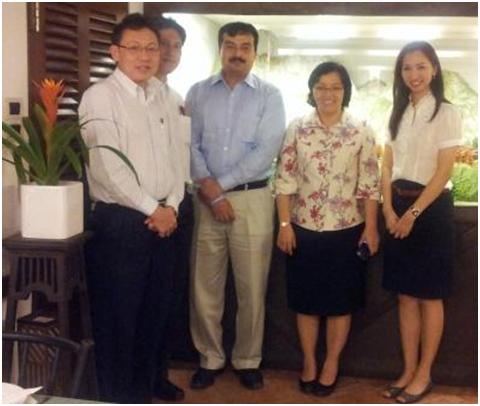 He was also responsible for bringing in Khun Suwipa and her team on board earlier in December when we had just started thinking and planning this trip. Who in turn were kind enough to take us for a really nice dinner and were the group responsible for introducing me to the now infamous Crepe cake at Secret Garden. 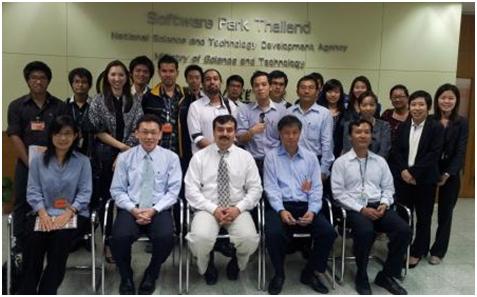 Photo op followed by a quick lunch, followed by an onsite 30 minute session with a young team that was trying to vet some of the ideas they were playing with and who were in turn invited for a quick look at the free pitching for startups online course. By the time we came out the skyline in Bangkok had turned dark grey and I was sure that I would get treated to atleast a decent rain shower. Somkiat on the other hand was less pleased given Bangkok’s recent struggle with water. 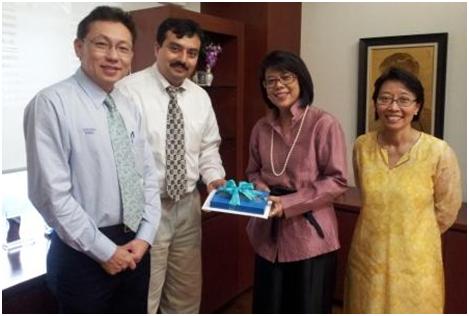 On rain splattered roads, it was a rushed ride to the Somkiat’s University – the famous Business School in Thailand at the even more famous Thammasat University. At a short notice Somkiat had managed to get a slot with the Dean of the Business School and a member of the Finance Faculty where we quickly pitched the FourQuants.com solution – Treasury and Risk education, packed in a neat little box, available on a handset, smartphone, laptop and youtube for use by Academia, students and practitioners. The Dean and the head of the Finance Faculty were gracious enough to listen to our proposal and agreed to take a look at what we had to offer. They then fed us yet another amazing Thai desert. 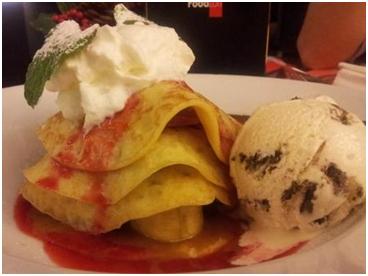 More pictures were followed by our now conventional tour of the Mall in search of Tomyum paste, fish sauce and the feed-Jawwad-his-Desert-of-the-day affair which I must admit my friend is getting really really good at. He has this uncanny ability to surprise me with the rarest of findings.

Day three of the trip started off with an Advil since my brain refused to recognize the fact that I was in Thailand while the rest of my mental faculties were still in transit somewhere between the Middle East and Far East. Luckily for us, Somkiat’s next appointment had been set at the nearby Securities and Exchange Commission where once again, the ground work done by his team made for a simple and pleasant pitch and very positive feedback.

For once we ditched Somkiat at the conference table at the Securities and Exchange Commission and ran to meet our second appointment of the day on the other side of town. Amphol, my colleague, friend and guide in Somkiat’s absence, took over the direction finding stuff, which in my Advil induced stupor would have landed me somewhere between the Andaman sea and the Gulf of Thailand. 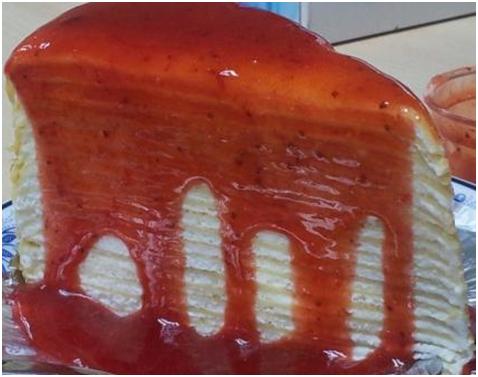 And then behold. We get to the office and find that as a parting gift, there are a few slices of the amazing Crepe cake waiting for us before we sit down for the last meeting of the day with Wealth Management’s team of sharp Business Analysts. For a short session of 30 minutes we focused on what the product did, how they could work with it, what do we want from them and some of the things they could do to help us get the word out.

This was followed by one last round of discussions with the new SEM and SEO group at Wealth Management, a quick dinner with Ian, our point man at Wealth Management for opportunities in the Philipines and it was back to the apartment at Somerset Park for a farewell to the bed I had hardly gotten to use in my four days in Bangkok. 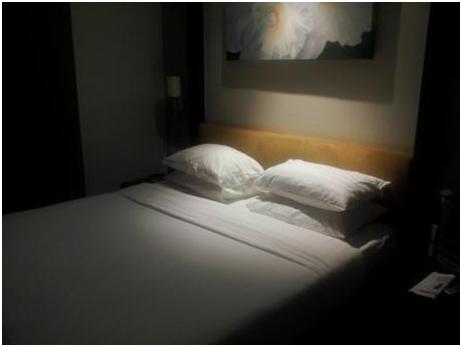 The reason why I was so happy with this specific trip to Bangkok was how well Somkiat, my friend and Wealth Management, his team helped us put together and execute a phenomenal trip. We first spoke about it in November when I had stopped over in Bangkok for a day to spend some time with Somkiat and given a short brief of what we are. We then exchanged a few emails and then had a kick off session for the next three days as soon as I landed. Within the next 6 hours based on our discussion Somkiat had managed to lock in almost every thing that we had wanted to get out of the Bangkok trip. We worked 12 hours for 3 straight days, spent a lot of time on the road in Bangkok, evenings enjoying Thai cuisine and came back home with a long list of leads and follow up activities. Leads covering not just Thailand but two other related markets in the Far East. 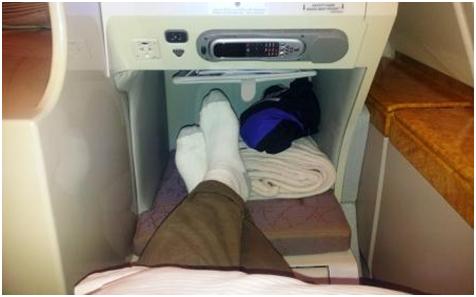 And it didn’t hurt when Emirates offered a complimentary upgrade to the A-380 business class.

3 thoughts on “Checking in from Bangkok. The Fourquants.com and FTC marketing tour of Thailand.”