Did we get any trading signals from the meeting of oil producers in Doha this Sunday? 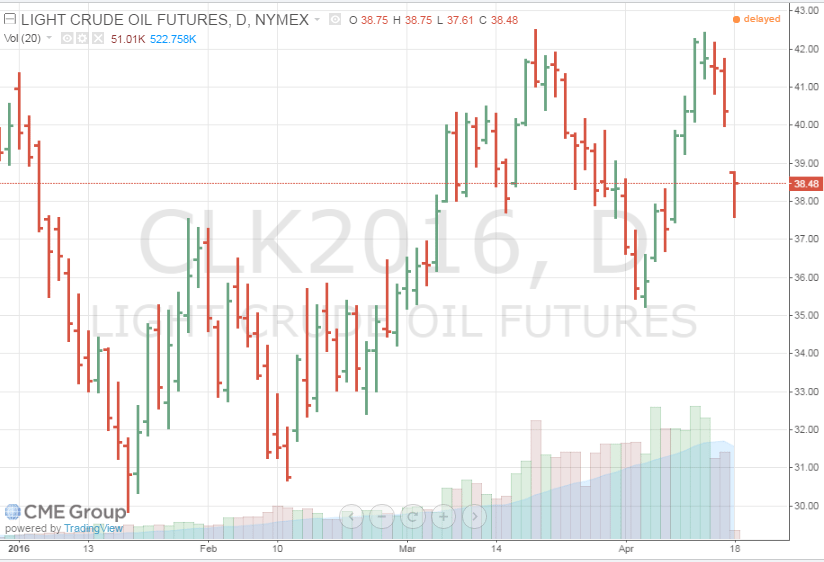 1. Who is behind the driving wheels in Saudi Arabia?

It is official if you had any lingering doubts. Deputy Crown Prince Mohammad bin Salman is now in charge of the policy directives on crude oil. Which implies that Saudi strategy on oil and region will continue to remain assertive and aggressive.

2. What is the corner stone of Saudi oil strategy?

Saudi strategy is based on a simple principle. Reduction in the oil supply glut cannot come at the expense of Saudi oil production or market share. While the press continues to report on Saudi Iranian tensions, the issue is commercial not political. Saudi Arabia is no longer interested in being perceived as the elderly and benevolent statesman if that requires the country to give up market share to arch rivals Iran and Russia.

3. Iran’s commitment to production versus revenues?

Iran’s economy is no longer primarily reliant on oil prices. Post sanctions less than 7% of Iranian GDP is linked to production of crude oil. From an Iranian point of view, the issue is not market share but up gradation of its oil producing and processing infrastructure (read: foreign investment flow), growing domestic demand as its young population comes into the workforce and competitive pressure from cross border Iraq.  With this context any accommodations Iran makes on the production front would be in direct conflict with Iranian national priorities.

4. Talk is cheap. Execution is difficult.

Russians are really keen and interested in doing whatever they can to keep oil prices up.  They have always been masters of managing public perception and in the weeks leading up to the Doha talk, that mastery was hard at work.  In the week before the Doha event if you relied on financial press for investment advice, you would have been correct to assume that the Doha talks were a done deal.  Every positive move in crude oil prices was linked to the finalization of the oil output freeze agreement between Russia and Saudi Arabia. It wasn’t until Thursday evening when adjustments in risk and trading positions triggered a directional change did that story finally begun to fall apart.  Friday and Saturday morning we had coverage indicating that the deal was in trouble but news coverage was split between positive and negative postures.  A number of analysts called out the flaws in the analysis linking Doha and price rise, broad market perception was that something will or should come out of Doha driven by a desire for common sense and self preservation to prevail.

5. The future of oil supply glut? What is in store for prices?

An oil workers’ strike in Kuwait may provide temporary relief to prices this week as the fallout from Doha talks hits prices.   But all eyes will be on the Wednesday release of crude oil inventory figures which will set direction for where crude oil prices will close over the weekend. On the supply front there is nothing but bad news as pre talk Saudi commentary hinted at internal spare capacity estimates of 1.3 million bpd.  Iranian production for March 2016 climbed by 110,000 bpd to 3.23 million bpd. The production increases appear to be on track on cross 3.5 million bpd by mid 2016.

The immediate impact as expected from Doha was negative but prices bounced back from their earlier sessions lows in early trading in Asia.  Prices may settle at their lower levels temporarily but the Wednesday inventory figures release would really drive direction later this week.