Financial modeling for founders – a startup friendly guide is scheduled for release in the last quarter of 2017. The book focuses on answering common modeling questions founders face as part of building up their businesses. Here is the preface for the book. 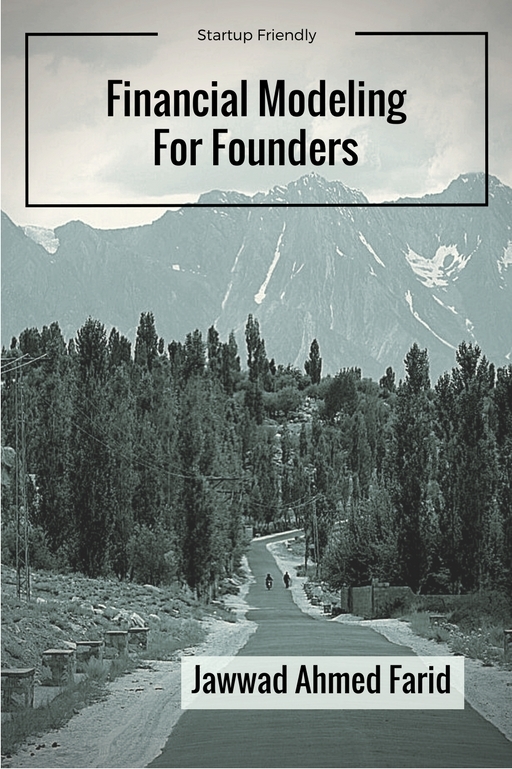 My name is Jawwad Ahmed Farid and I am the founder of FinanceTrainingCourse.com.

I have been building spreadsheet models since I was 14 years old. I was one of the few teenagers on this side of the planet who were fluent with macro programming in Lotus 123 in 1989; who could dance along with Symphony (the first “office” package, not the sound track) and who hated Excel to the core when Lotus lost out in the spreadsheet wars.  Thirty two years later I still use Lotus shortcut keys (my secret super power) and it has the desired reactions in class rooms across the world – “WTF, How the hell did you do that?”

While spreadsheets may have been my first love professionally, startups come a close second. I have done nothing but build or contribute to building new technology focused businesses for the last eighteen years.

The first one got shut down in the fall of 1998 after an eventful six months. The second business lasted a while and gave me a chance to put those modeling skills to work again. It helped that I was also a full time student at Columbia Business School while working as a full time founder on the side. As things got serious for venture number two (named Avicena) I began work on building a detailed financial model. The objective was to answer investor questions and supplement the business plan for the idea. By the time we were done two years later we had pushed 58 editions of the financial model out to the world.

I had never worked as a founder for a startup before. Raised in a financially conservative family we were always encouraged to plan things out. This conservative streak was exaggerated by the years I worked as a consultant. By the time I got to Columbia and started work on idea number two, I had bought into the concept of planning this one thing to death. I understood that this was the riskiest thing someone had done in my family across three generations by choice. My approach to manage that risk was to plan it out.

With that spirit I took four courses on financial planning and modeling as part of the MBA program. Managerial accounting, Valuation and Financial Statements, Entrepreneurial Finance and Tax factors. All four were taught by world class faculty who rocked both inside and outside the classrooms. All four played a part in ensuring that I understood what I was doing.

Managerial accounting introduced us to activity based costing, product cost allocation and profitability. Valuation and financial statement covered financial projections and the ability to correctly drive enterprise value using a number of methods. Entrepreneurial Finance, the course taught by Glenn Hubbard, the current dean of the business school, walked through one entrepreneurial case a week.  We blazed through themes of raising funding, the mechanics of convertible debt, investor term sheets, product finance, financial projections and decision making under uncertainty. Tax factors the most practical and applicable course of the lot and the one that actually saved me quite a lot of money in the end walked us through the US tax code as business owners, managers and founders.

Given the fact that we hadn’t written a single line of code, didn’t have a product, weren’t sure if we would be able to raise funding, hadn’t hired any employees, or locked in clients, customers, suppliers or vendors, our financial model was in pretty good shape. With ten odd tabs and a few thousand interlinked cells it was equivalent to the Spanish armada on steroids out to hunt an errant fisherman in his flimsy wooden leaking single oar boat.

Despite the sophistication of the model and the amount of effort we had put into it over the year, when a customer first asked me about how much our product would cost his company on a monthly basis, I didn’t have an answer.  This was a question my multi-tab, ultra-sophisticated model with a full decade worth of projected financials was not designed to answer. It could tell me projected revenues for next month, the average price per ticket per customer per year but it didn’t tell me what to say to Steve who was waiting on the line for me to answer that question.

We also had detailed projected statement of cash flows breaking down our cash needs on a month on month basis for the next 5 years.  Yet as we ran out of cash a few months later in May, I wondered what good did that section of the model actually do?

I am being too harsh. There was one thing the model did exceedingly well. It was designed from the ground up to answer the valuation question and that is a question it answered very well. Too well in fact. A few months after we started, armed with nothing but a basic prototype, a business plan and our financial model, an angel investor offered us a term sheet in May 2000 that put in US$ 2.5 million for 30% equity. Fresh off the boat with me still on an OPT visa we were worth between USD 7 – 9 million depending on how you sliced the equity. We turned the angel investor down politely because accordingly to our model that valuation was too low.

I hope you can see the irony and humor in this. I couldn’t.

My major at Columbia was finance. I divided my time equally between building the product, finishing my course work, completing the business plan, reaching out to customers, tweaking the financial model, talking to investors and building a team. I was a reasonably well grounded, clued in, experienced consultant turned founder working twenty hours a day in the relatively hot e-learning space. Two years later when we finally failed I was so traumatized by the experience that I had to write a 284 page book to get it all out of my system.

There were many reason for our failure. We got a lot of things wrong. But the one thing we didn’t expect to get wrong was our model. It was the one thing we had always been sure about. Unfortunately while our model was technically right and academically sound (collective scores of two B+ and two A across the courses it grew out of), it was hopelessly out of sync with the real world. The model wasn’t at fault. Nor were the professors. I was. The model only answered the questions I had trained it to answer.  If the model was off it was only because I had been asking the wrong questions.

Avicena, venture number two was followed by AnnuityNet (Order entry platform selling tax advantaged savings vehicles), Alchemy associates (training and actuarial services for financial industry), Alchemy technologies (Enterprise risk and treasury software for banking customers), FinanceTrainingCourse.com (the site you are on right now) and Sunoida Insights (Enterprise risk for Africa). Much as I hated building valuation and operational models, I built them for all five ventures.

Side by side with working as a founder I also taught entrepreneurship as an adjunct. I tried to ensure that my students didn’t make the same mistakes I did.  Then the technology industry association (PASHA) came along and I taught the same concepts first to members of the PASHA delegation competing at the Asia Pacific ICT Awards and then to startup teams incubated at the NEST.io technology incubator in Karachi.

But like me, many of the teams I worked with also failed. Despite their intellect, their experience, their work ethic and their promising markets they ran into trouble. I am not talking about the also rans, the ones that didn’t stand a chance. I am talking about the leader board, the ones we were sure would reach escape velocity and transform themselves into role models and getaway stories.

For the longest time I felt that if we got the product market customer fit right, if we could sell and collect revenues, if we could pick the right market and price it right, everything else would work out. After all these were the most difficult dimensions of building and running a startup. If you could get these out of the way the hard part was behind you. I was wrong.

You could get all of that right but if your model kept on asking the wrong questions you could easily run into trouble.

To a large extent this book is focused on asking the right questions. Or asking questions that are too mundane and boring to ask. If the real meat in your business is building cool technology why should anyone care what a customer support call costs. Even if you did we are more interested in getting right down to the valuation question rather than thinking through all the drivers that trade valuation off for things that really matter.

Every few months a team I am mentoring comes along and says we are not sure how to do this, can you help? This book is a collection of those, yes I can help question and answer sessions.  And getting approximately right, fast crude answers as quickly as possible.  So the next time a customer like Steve asks you how much the product is going to cost, you can give him a rough ball park figure that is not going to sink your ship.

But before we do that lets take a step back. I would like to get something off my chest.

“Multi tab, super complex financial models are over rated. We spend too much time building and tweaking them – time that could be better utilized elsewhere – reaching out to customers, fixing operations, prioritizing product features or going out shaking hands and closing deals.”

There we are done. I said it.  I am not going to teach how to build complex financial models. This is not what this book is about. There are some really good ones out there if you fancy an orchestra of a million cells and I would be happy to point you to them.

I would just like to focus on using modeling to answer the collection of small problems we face as founders that merge to form our businesses.  So questions and answers. Find the one that is pestering you right now and jump right on to it.

Start with correctly pricing an actual resource. Could be a member of your development team or a rider you have sourced to make deliveries. Roll that up into logistics. Add margins for profitability, cycles, downtime, overruns and supervision. Map that to a transaction. Link that to a customer. Plug that into your model. The final model is still not going to be related to T-Rex but at least it would be built up on real data and real assumptions.  Once you have it up and running, calibrate it against actual numbers, performance and figures. Double check and see if you really are clocking in that 30% margin you have been so proud of. That in essence is the book.